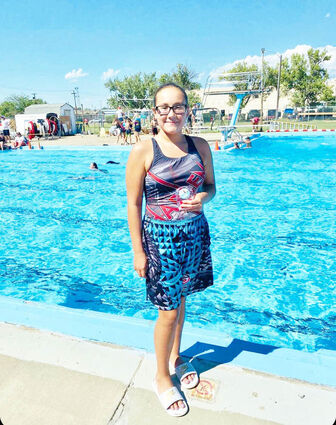 Harlem's Ciana Johnson captured the girls 9-10 division High Point Trophy while in Glasgow this past weekend. Despite record temperatures, Johnson won all three of her individual events to win the award.

The Chinook Lions and Harlem swim teams headed east this past weekend to compete in the Glasgow Swim Meet. It was a tough go for everyone involved, not because of the nearly 300 swimmers set to compete, but because of the scorching heat. Temperatures soared into the triple digits over the weekend topping out at 108˚ on Sunday breaking an all-time record. Temperatures on the pool deck soared even higher making it miserable for timers, stroke judges and swimmers awaiting their race. Despite the various obstacles swimmers from both teams excelled when it came time for them to swim.