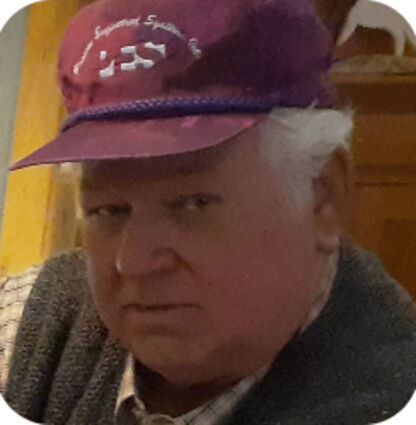 Mick was raised in Chinook, attending Chinook schools, and graduated in 1965. He enlisted in the U.S. Navy and served two years on active duty and four years in the reserves. He spent one tour in Vietnam as a Navy Seabee. They were builders, getting things ready so the Marines could do their part.

After his discharge, Mick worked for a time in New York. He then returned to his home in Chinook.

He worked many years on highway construction but was also an accomplished carpenter, having worked summers with his dad for Siert Construction in Chinook. Mick retired after 22 years with Blaine County Road Department. He was vested in Operating Engineers Local #400. He was an active member of VFW Chapter 4620.

In 1980, he and Linda Gilmore Jones were married in Chinook and he became Dad to Leve and Casey.

Mick loved hunting, fishing, and puttering in his shop. He created a tryke using a Volkswagen frame and motor, cutting and welding the frame and then painting it. As it took shape, his grandson Payton Jones, became a great help, taking over most of the welding. The two of them spent hours on the motor and transmission, resulting in a fine-looking machine.

Mick also made diamond willow walking canes to be auctioned at his Navy Seabee reunions.

The last several years, Mick served as Chairman of the Chinook Cemetery Board, he was able to complete several improvement projects in his tenure, as well as projects at the Alice Nash Memorial Cemetery in South Blaine County.

Mick was preceded in death by his father, mother, sister and brother in law Chuckie and Marc Cramer, brother and sister in law Bill and Elaine Thompson, and his beloved grandson Payton Jones. He is survived by his wife Linda; sons Leve Jones (Brenda), and Casey Jones (Michele Bemis); grandchildren Saraya Jones, and Brianna, Bailey, Brogan Zumbrun, and Sterling and Jace Bemis He had many nieces, nephews, and cousins, and special cousins Mace and Jane Thompson.

Mick's graveside service will be Friday, July 29th at 11:00 AM at Kuper Memorial Cemetery in Chinook.