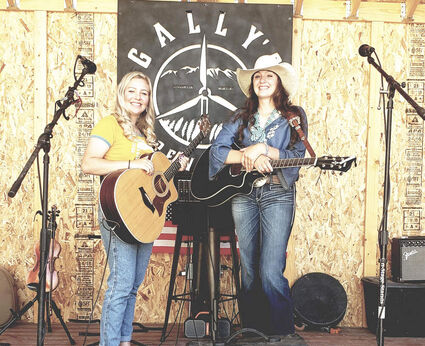 Following the Bear Paw PRCA Rodeo Roundup on August 11, the Wortman Sisters will take the stage in the grandstand arena at the Blaine County Fairgrounds.

The musicians are the daughters of Lacy Wortman, who owns property in the Bears Paw Mountains. Georgia Wortman is 21 years old and completing her final year of college in Bozeman where she is studying Ranching Systems. Her sister Tavie is 18 years old and will be attending Blackbird Academy in Nashville this fall where she will pursue training as an audio engineer.

A professional sound engineering school, Blackbird Academy is located at the center of the audio production universe. Graduates not only take-away the technical skills required to work in the musical trade but also learn the art of sound production from some of the top names in audio. Tavie hopes her training at Blackbird Academy will establish a firm foundation on which to build her career.

According to their stepmother, Sheena Wortman, both sides of the girls' family are very musical, so the duo grew up playing old-time country music. When they perform, they play a variety of music-from country to blue grass and rock and roll. To their résumé, the pair can boast that they have opened for the Bellamy Brothers in Lewistown at the Montana Cowboy Poetry Gathering. Georgia plays guitar and sings, while Tavie plays fiddle and guitar in the band but plays a multitude of other instruments.

Whether fair-goers attend the rodeo or not, they are invited to hear the Wortman Sisters on Thursday night under the lights in the grandstand arena during the Blaine County Fair.