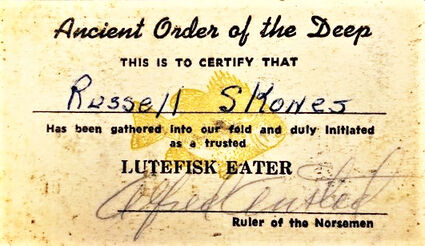 This is a photo of the membership card Russ Skones received when he was voted in to the Ancient Order of the Deep-also known as the "Lutefisk Eaters." The club of ten men met three to four times a year from the 1950's to the late 1970's to enjoy a lutefisk dinner. I later learned that E.L. Luckett was also a member and still has his original membership card.

When my wife and I moved to North Dakota we lived among a lot of Norwegians, a new experience for us. We'd never heard of lutefisk...and certainly never eaten it. We learned a lot about "lutefisk and meatball dinners" and other Norwegian traditions. Not realizing the large geographic spread of Norwegian culture in our own country we were amazed when we moved to Libby, Montana, then Chinook, and also found lutefisk eaters in those places.

A recent surprise in Chinook was to learn that back in the 1950's to late 1970's Chinook had its own 'official' group of lutefisk eaters, the Ancient Order...