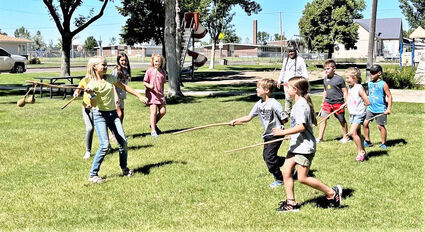 Participants in the Blaine County Museum's recent day camp were photographed playing a spirited game of Double Ball, a traditional native American team game. Hannah Has Eagle led the session on native games pointing out, "You can make a game out of just about anything you have or find."

Last week the Blaine County Museum hosted its first ever "Day Camp for Kids." The day camp had separate morning and afternoon sessions, drawing 35 kids total. Samantha (Sam) French, the Museum's director, said she was very pleased with the turnout and "will definitely do a day camp again next year." Looking for ways to help build "good memories of visiting the museum" French took the suggestion of Peggy Perry, a local museum volunteer and retired school teacher, and made the idea of a fun day at the museum in to a reality "with the help of volunteers."

Shortly after the day camp was completed I visited with Museum Director Sam French and a few of the others who helped plan and present the program. Sam said, "I wanted to do more than just a one-time walk through where kids could look but not touch anything. I wanted to present interactive activities where the kids learned history by doing it." Bear Paw Battlefield Ranger Austin Haney who also helped at the day camp said, "I wanted the kids to be able to see, smell and touch history." Other volunteers : Olivia Finley Downs, a Cataloging Intern; Julie Briere, part-time summer museum staff and Emilee Wegner, a volunteer and cousin to Sam French.

The activities were varied and interactive

On the registration form the kids were encouraged to "ask your parents about a family story that says something about why you are as your are...where you came from." Sam French explained, "Using a story of their own history I wanted the kids to see that history is written based how people see things. As an example of something that may or may not have really happened, I showed them a painting that Charlie Russell did titled "Camp Cook's Troubles." The portrait was a bucking bronc tearing up the breakfast set up at a cowboy campfire.

French told the kids, "The idea of a bronc tearing up the cooking fire was popular among cowboys. Maybe Charlie Russell really saw this happen or maybe he just made the painting based on what he had heard." The kids at camp then set about making their own interpretive art of a real or imagined family event or story. Those images ranged from a leprechaun to "lots of ranch and farm animals, particularly horses." French thinks maybe showing the bronc painting just before the chalk drawing exercise resulted in kids thinking about horses and other farm animals they had encountered.

Another very popular activity was the touch table. Created and manned by Ranger Austin Haney, the items on the table were common items that were used by the fleeing Nez Perce and the pursuing soldiers during the flight of the Nez Perce to Canada in 1877. Among the objects the kids could handle and inspect was a jar of ground camas root, a delicacy among many tribes. Camas roots were dug by the natives for food and could be eaten fresh, cooked or dried for winter food. Ranger Haney noted some kids thought the root smelled like coffee while others said the "smell was like pancakes."

Another item on the table connected to both travelers and soldiers through history was hardtack. Basically like a very dense and hard saltine cracker, Haney said of hardtack, "There was no way to eat the hardtack without crushing or breaking it down and soaking it in some fashion. Often the soldiers would make a kind of flour and then fry a dough of hardtack in bacon grease for flavor." He noted the square shape of the hardtack gave rise to the saying, "Three square meals" likely coined by soldiers referring to the shape of the square of hardtack.

Toward the end of the morning session and the beginning of the afternoon session the kids in museum camp were at Sweet Park (by the swim pool in Chinook) to play native games led by Hanna Has Eagle from Lodge Pole. She introduced her presentation on native games noting, "You can make a game out of anything" and related how native children created games with items on hand or what they found in the natural world.

Sam French said, "In addition to the small individual games the kids learned, there were two very popular competitive team games. One was 'run and scream' where participants take a deep breath then all start running in the same direction and screaming. Where they stop screaming/running is measured and the person who ran the furthest is the winner." French admitted she was inclined to try the run and scream game in the future after particularly trying days at work. 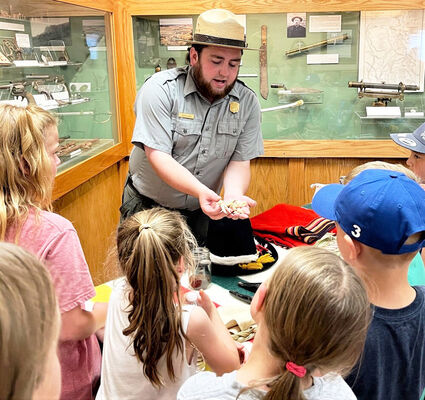 Park Ranger Austin Haney shows breadroot to participants in the recent Museum Day Camp held in Chinook. The low growing plant is common on the western prairies of North America and the starchy roots were dug by native Americans for food.

The other game called Two Ball is played with two balls tethered to each other with a piece of leather. Players on both teams each have a stick. Using the stick to throw and catch the tethered balls the object is to throw the balls so they hang over a 'goal' at either end of the playing field. Defensive players try to snag the thrown balls with their stick to stop a score.

What about next year?

Sam French said, "While the day camp was a great success, it was very tiring on all of us. The key to having the program in the future is having a sufficient number of volunteers to help organize and run the events." She's hopeful that at future camps she can introduce participants to roping, treadle sewing and other historical skills common to the area. She's also thinking about other groups (like seniors) that might enjoy some variation of the museum day camp. If you have ideas for future activities at day camp or would like to have a similar program for a group, contact Sam French at the Blaine County Museum in Chinook.