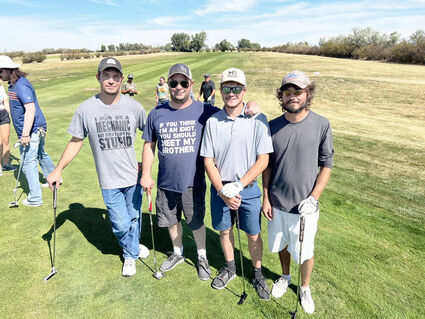 The 'Team of Brothers' take time for a picture early in the tournament on hole 8 Green. Kris, Ben and Clayton join little brother Karson in their first tournament together as a team.

The 26th Annual Fireball Four Person Scramble Golf Tournament was held this past Saturday at the Chinook Golf and Country Club. Over the past five years the tournament has continued to try and match the demand for entry, expanding the field to a whopping 27 teams. It's safe to say the course was filled to the brim with three teams, featuring 12 players, began the tournament on each of the courses nine holes.

With such a large field the registration, Calcutta and start time were all moved up to get play started as early in the morning as possible. Teams took to the course full of energy and...