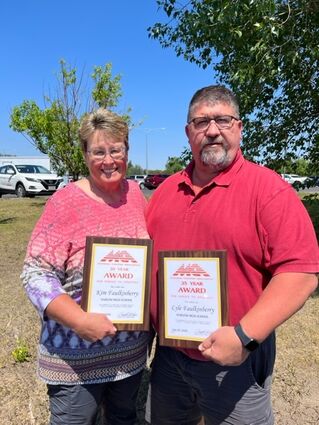 For more than three decades Kim & Lyle Faulkinberry have been on the sidelines mentoring young student athletes as they progress through their high school careers. Lyle has been coaching for 35 years and Kim for 32 giving the pair a remarkable 67 years of combines service to the student athletes of Harlem High School. Coaching at any level in any position, Assistant Coach, Head Coach, Volunteer Coach is task that requires extreme dedication and grit. To be a good coach requires the ability to show restraint, but still motivate; to show compassion but still push for more. It requires the ability to connect with all different types of athletes to figure out what form of mentorship will push that individual to excel beyond their own belief.

It also requires a thick skin willing to take an ever-increasing amount of harsh pushback from parents, fans, the Administration and even media. To coach for more than three decades is remarkable and as a result of the dedication to the profession by the Faulkenberry's, the Montana Coaches Association (MCA) has recognized them by presenting them with their 30 and 35 year Longevity to Service of Athletics plaques this past summer. Combined the two of them have enough memories and stories to fill a book, but they each took a few moments to reflect on their time as mentors and share some memories.

Coach Kim Faulkinberry began her career back in 1990 coaching junior high volleyball as well as junior high girls' basketball. She continued to coach junior high sports if the high school schedule allowed it. Eventually after taking on the position of Track and Field Coach she found herself coaching in all three sports seasons. Kim was the Head Girls Basketball Coach for several years before becoming an assistant to Jack Plummage, "I thoroughly enjoyed coaching with Jack, we made a great team and took many teams to the Northern B Divisional."

Coach Faulkenberry's coaching resume is extensive, but another highlight included a win over Fairview in a consolation game 10-8 in overtime after being tied 8-8. She also recalls a time in Glasgow where she had a player roll an ankle with less than a minute to play. A quick tape job got the player back on the court where she drilled the game winning three at the buzzer. Subsequently she has coached several teams to great seasons but one thing that stands out is her volleyball program. "I remember the many years where we hadn't earned enough respect to have an All-Conference player and, in the years, since we have had numerous all-Conference and one All-State. Making it to Divisional for the first time in school history was a definite highlight and then a few years later playing in the District Championship.

Coach Lyle Faulkinberry is best known for his many years at the helm of the Harlem Wildcat Wrestling program. Lyle started out as an assistant coach for the wrestling program back in 1987 for Head Coach Jim Murch but after the first week of practice Joe requested, they switch positions, making Lyle the Head Coach, and they did. The pair coached together until 2015. Lyle also served as an assistant football coach that first year to Head Coach Rod Benson. In 1988 he began coaching the Track and Field team in the spring. "I have coached at all levels of football, wrestling and track at Harlem schools and even coached Babe Ruth baseball for two years," stated Lyle.

In 2007 Lyle was selected to be the coach at the Class B All-Star Football game. In 2013 he began coaching volleyball as an assistant to Kim. Lyle states one of his many highlights in his coaching career is being able to coach alongside his wife Kim as well as his good friends Joe Shupe, Marty Dirden and Jim Murch. Another highlight included ending the Conrad Cowboys historic streak of 17 straight Divisional Wrestling titles by winning it twice in three years.

Lyle reflects on his time as a coach by saying, "Rules have changed, and you must adapt or get left behind. Your philosophy and fundamentals must adapt to give your athletes a chance to succeed in the sports arena, the educational arena or life." What does the future hold? Lyle adds, "More coaching, returning to wrestling as an assistant. Continue coaching volleyball. We have talked about continuing to coach after we retire, but time will tell. I have made a lot of friends through the years, and it has been a pleasure coaching the students at Harlem High School. Maybe someday in the future I might get the honor of coaching my granddaughters! Coaching and teaching students have brought a ton of joy and tears, but in the end the kids keep you young."