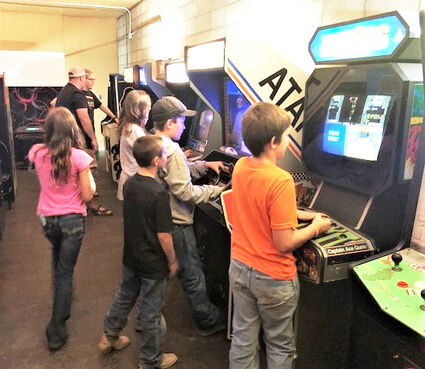 Jeff Finley recently completed his new arcade gallery housed at the rear of the local grocery store in Chinook. The arcade, available for rent by the hour, features 16 full-sized vintage arcade machines, many dating to the early days of electronic games. This group of youngsters playing the games was at a birthday party for Jeff and Lynette's oldest grandchild who turned ten.

I was recently invited by Ken and Jeff Finley to attend a birthday party for Jeff and Lynette Finley's oldest grandchild who turned ten. The father-son team described the event as "our first trial run with real customers." They were referring to the upgrades Ken has added to his pumpkin patch down by the Milk River and Jeff's new Aisle 8 arcade gallery at the grocery store, featuring "16 vintage full-sized arcade games." The birthday party started at the pumpkin patch, finished up at the arcade in Finley's Food Farm grocery store in Chinook.

Both Jeff and Ken derive obvious pleasure by pro...