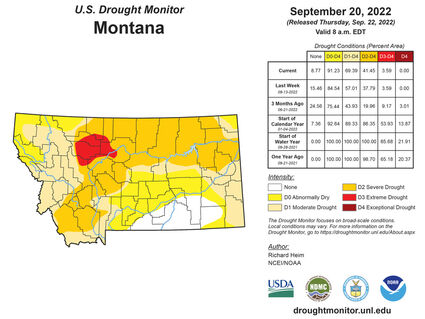 Living in an agricultural community, weather is often the topic of conversation wherever you may be, the store, the post office or at a ball game, you will often hear the familiar "We sure could use some rain!" Weather, as a result, is a topic we all relate to; a conversation starter, connectivity with others and a way to unite. Smiles and joyful people are more common after a good rain, and when it's dry coming together to complain about the drought brings a connection. Weather affects everyone locally, not just the grain and cattle producers, but all of us. The agriculture industry is at the heart of the community, and we all want, need those operations to be successful.

After coming through a spring and summer that included severe drought back in March to rains in May and June and extreme heat in July and August most operations somehow managed to get through. Others faced extremely difficult decisions that aren't anything anyone wants to be discussed publicly. As we head into fall and winter everyone is hoping for a turnaround and holds out hope for a good amount of moisture to really help things out in the spring.

Producers have been forced to use up much, if not all, of any reserves or available options and having to repeat it all again in the spring would be extremely difficult for some to survive. All eyes, as they are every year, are on the weather and what is forecast for the region. Some look at the forecast to with optimism, hoping, praying for a good amount of moisture. Others have taken the "I can't control it, it's out of my hands. Whatever it does, it will do, and we'll go from there," approach.

The Farmer's Almanac, a popular source for many since its first publication back in 1918 anticipates the North Central region of the country, Iowa, Colorado, Kansas, Minnesota, Missouri, Montana, Nebraska, North Dakota, South Dakota and Wyoming will see a fair share of storms bringing a fair amount of snow. It also states that winter will make its presence felt a bit earlier than last year and will include multiple 'significant weather disturbances'. Furthermore, the publication suggests that two thirds of the country will be affected by heavy snow and rain from January 16-23, 2023 and will be followed by extreme cold with temperatures dipping to forty below.

The US National Oceanic and Atmospheric Administration (NOAA) makes long-range forecasts each month and also adds a warning to their press releases, "WARNING: Long-range forecasts are rarely accurate.' The NOAA suggests that Blaine County will experience a 33-40% chance of less than normal temperatures, following suit with the Farmer's Almanac. With regards to the precipitation forecast over the same period, the NOAA calls for a 33-40% chance of above normal moisture probability, also in line with the Farmers Almanac. Let's hope that their predictions are in line with reality.

An above average winter for moisture would be a huge blessing to local producers. Snow cover locally and strong snow accumulation in the mountains will only ensure a good spring. Runoff will fill reservoirs and rivers and stream will run full. Hears to being optimistic, after all that seems to be the best way to make it through living in north central Montana.