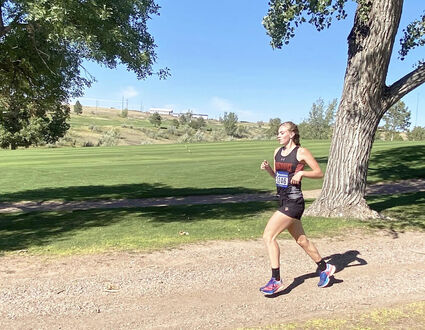 The Chinook Sugarbeeter Cross County team was in Great Falls this week to compete in the Great Falls Invitational. The race was ran on the Anaconda Hills Golf Course and features drastic elevation changes in what many consider to be the toughest course set up in the state.

The 'Beeter girls had their first individual champion in Great Falls with senior Anna Terry leading start to finish to top the field of 132 runners. Terry conquered the difficult course in 22:07.05. Freshman Emma Klingamen crossed the finish line in 28:41.00, freshman Kirby Hofeldt followed recording a time of 28:48.62. Sophomore Jeni Mord clocked in at 29:12.77 and junior Ryley Hofeldt finished in 30:01.56.

Junior Corey Bilger was the lone 'Beeter boy in the field of 183 Saturday afternoon. So many runners in the field saw their times take a hit with the difficult number of hills, but Bilger stayed right on track with his season times finishing in 24:30.10, in line with his previous couple of races.

Chinook Head Coach Kendal Harwood was pleased with his teams effort on a very challenging course, "Anaconda Hills, as expected, was probably the most difficult course these kids will see this year. And they all stepped up to the challenge." 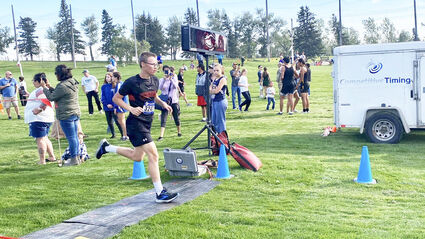 Junior Corey Bilger didn't let the terrain of the Anaconda Hills course slow him down, completing his race in 24:30.10.

Harwood was thrilled to see Terry win the schools first individual race, "Anna had to run a smart race and pace herself the whole way. She got out fast and led the whole way. Chinook was entered into the small schools division of the meet. It would've been interesting to see Anna compete against the runners from the bigger schools."

Harwood commented on the mindset of the teams only boy in the field, "Corey was determined to not let the hills get to him. His time matched that of his previous race. On that course that's pretty amazing."

Looking to the second half of the season Harwood is confident in his team, "Our team has some personal and team goals. We have been looking at how their times compare to the rest of the state. They know they have some work to do if they want to achieve their team goal. I know each of them want to drop a few minutes in the next week."

The 'Beeter will have this weekend off and the close out the regular season in Malta on October 8 and Harlem, October 14. The State Cross Country meet for all classes will be in Missoula on Saturday, October 22.