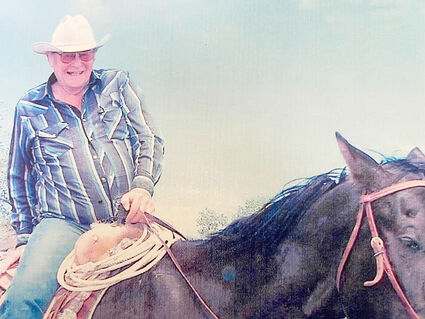 On September 20, 2022, we lost a legend. He may not have been to all, but he was to most-especially to his family.

James (Jim) Albert Halseth, you will be missed, you will be remembered, and you will be worshiped by many, but especially by your children and grandchildren. The day you left us our hearts went with you.

Dad was born on November 29, 1932. The world was never the same after. He grew up as a cowboy and he would die a cowboy. In between was a menagerie of events. I'm not going to even try to recall all the names of everyone and the places he gifted his presence with. His cowboy life, however, was his best life. He took so much pride in it, he glowed and often shed tears telling all about his younger days. He tortured a few women along the way, a couple that I know for certain. In the end, I think they couldn't help but love him deeply, while still wanting to kill him.

Dad also worked for many years on the railroad. I'm not sure if he loved the work so much, but he loved his comrades, and it was reciprocated. He was known as "Uncle Jimmy." All I remember was that "Uncle Jimmy" was reprimanded a lot by his wife (A.K.A, Mom) for having too much fun. During this period of his life, Dad decided to run for sheriff of Blaine County and county commissioner at one point. Thank goodness he didn't quit his day job because that didn't pan out. Having no one else to blame, he blamed his "delinquent" children for ruining any chance of having a political career. Myself and my siblings know that God knew to never give that man any more power than he thought he already had.

Moving along, Dad was truly a great artist and an accomplished author. He wrote and published three very successful books that captured hearts with his colorful humor. If you haven't read them, you need to. As time passed, he had a mid-life crisis and purchased the Cleveland Bar 25 miles south of Chinook. Many memories were made there. He often said it was one of his bigger mistakes in life, but regardless, he did it, and he did it well. His humor and his presence radiated comfort at times and entertainment always. He made his mark on many, many people while he was there. Humor was his strongpoint, and stories that were endless-some true and some we know he fabricated even if he said he didn't.

Many years later, he sold the bar and moved to town to relax and cause hate and discontent where he saw fit. This was one of his specialties, that if anyone truly knew him, had to admire: stir the pot, leave the scene, and somehow make a great story of it. If he wasn't doing that, he was being molded into one of the greatest babysitters of all time. His grandchildren will never forget him, to say the least. All the faults in the world, he loved his grandkids-every single one. He did cuss his kids a bit, but that's to be expected. We all knew his love and devotion to us was unwavering.

You will be missed, Dad; more than you would ever know. You were a good dad and a good friend. Fly high, and we hope you found a decent horse for the trip.

With lots of love and respect forever, Your children