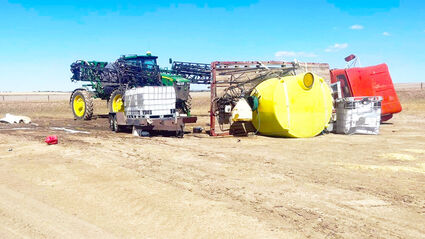 The Blaine County Sheriff's Department has issued a press release that states two individuals have been arrested and charged in a string of vandalism incidents in Blaine County. The press release stated, "The Blaine County Sheriff's Office would like to thank everyone involved in the vandalism investigation that was reported in south Blaine County on August 18, 2022. There was an extensive amount of damage, hundreds of thousands of dollars inflicted on the farm equipment, wildlife, and land. Warrants of Arrest out of Blaine and Chouteau County were issued and served on 19-year-old Jasper J. Wendland, and 18- year-old Devon C. Nelson. Wendland and Nelson were each charged with numerous felony and misdemeanors for the incidents that took place within Blaine County."

Blaine County Sheriff John Colby added, "I would like to thank the agencies that participated with us in this investigation. Fish Wildlife and Parks, Chouteau County Sheriff's Office, Hill County Sheriff's Office, Havre Police Department, Tri­Agency Drug Task Force, Blaine County Attorney's Office, Chouteau County Attorney's Office, and the Beaver Creek Park Superintendent Chad Edgar, for the use of his new camera system in Beaver Creek Park. Everyone involved worked quickly and effectively to bring this incident to a close. I would also like to thank the victims and community for their patience while the investigation was being completed."

The investigation into the vandalism began immediately and is extensive. On August 18, 2022, the Blaine County Sheriff's Office (BCSO) received a report regarding vandalism that had occurred at several locations along the Clear Creek and Lloyd Roads, located in Blaine and Chouteau Counties, Montana. BCSO Civil Officer, Shaun Guffin, responded to South Blaine County to the Lone Tree Bench area to document the damage and vandalism. That investigation led to the discovery of a number of vandalism events to include damage to vehicles, trailers, tractors, sprayers, fertilizer tanks and fences to property owned by Lone Tree Cattle Company, Lacey Wortman and Kevin Young, Blaine County Road and Bridge equipment including a 2012 Massey Ferguson Tractor leased from Tilleman Motor Company.

A request was made to see if Montana Fish Wildlife and Parks had trail cameras located in southern Blaine County and if they could check them. On August 10 MFWP Investigators had met with Justin and Laura Boyce regarding a vandalism incident in their place involving a tractor and skid steer. Investigators cleared the site when they noticed a dead Mule Deer Doe that had been shot with a small caliber firearm and a partial footprint near the carcass. The location was in between the two vandalism sites. On August 19 surveillance obtained from Bear Paw School showed a vehicle driving into the property at 3:18 a.m. on August 18. Investigation led to a vehicle located in Havre with similar markings identified in the video. Tire tread appeared to match impressions left at both vandalism sights. 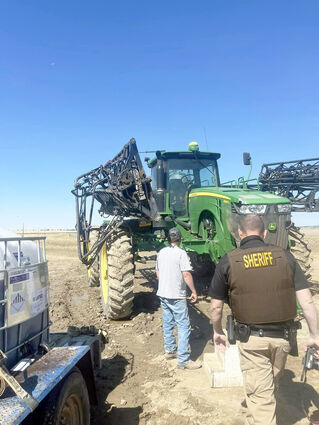 Further investigation led to Verizon (TDOA) Time difference of Arrival that estimates a location of a phone's location while in use. Data received by investigators eventually led to a Warrant to search the phones of the suspects after their location was determined to be in the area of the vandalism at the appropriate times. Transcripts of texts exchanged between the two suspects provided plenty of information to warrant an arrest warrant being served.

In the Motion for Leave to File Information it is stated, "Wherefore, based on the foregoing Affidavit, the State respectfully petitions the Court for its Order Granting Leave to File an Information in the above captioned matter. The State further requests a Warrant be issued and bond be set in the amount of $10,000.00." Both defendants posted bond and have been released per Judges orders.