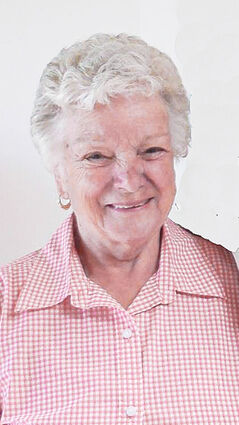 Janet Hall made her journey home on October 13, 2022, at the age of 82, while surrounded by loved ones at the Sweet Memorial Nursing Home. She had fought a couragous and valiant battle with Alzheimer' s.

Janet was born on June 7th, 1940 to William and Greta Bogert. She grew up with her parents and three siblings on their family farm in Paradise Valley between Chinook and Harlem. On Christmas Eve in 1956, Janet married her life long partner, Ira Hall, while he was home on leave from the Army. Over the next couple years, Army life took Janet east, first to Staten Island and then New Jersey where her first daughter was born. Janet and her small family returned to Montana in 1958, and she and Ira dedicated themselves to building their family, their house moving business, and a good life for themselves. The beginning was humble, with a small house in Havre that was an empty shell, but they quickly made it a home with some remodeling and the addition of two more daughters. With their family growing, Janet and Ira then purchased a small place west of Havre where they welcomed their fourth and final daughter. Those years were lean ones, but Janet was never afraid of hard work nor did she complain about the many talents she had to develop to keep forward progress. In 1969, that progress lead Janet and Ira to load up their girls and their very first calf into the back of their station wagon, and move back to the Chinook area where they had purchased land from Ira's family. They would spend years working side by side to turn that raw land into the home base for Red Rock Limousine (their cattle ranch), Hall House Moving, Janet's small yet prosperous purse and bag business, along with decades of family gatherings hosted around their dinner table. Years of hard work allowed Janet and Ira to retire to a new home in Havre in 2008. It was in those final years that Janet and Ira got to spend their time doing some traveling and showing their family what a 66 year love affair should look like. Janet's last years spent battling Alzheiemers did nothing to diminish her legacy as the matriarch and glue of her family.

Of the many hats Janet wore over the years, wife, mother and grandmother were her favorites. Other titles induded but were not limited to book keeper, office support staff, flagman for wide loads, bovine midwife, irrigation technician, seamstress, hay harvest crew boss, chief cook, life coach, and optimistic cheerleader to family and friends. She will be mourned deeply.

Services will be held at Wilderness Funeral Home in Chinook, MT on Friday, October 21st at 11 AM with burial to follow at Kuper Memorial Cemetery. In lieu of flowers, memorial donations can be made to the Alzheimer's Association, 225N. Michigan Ave., FL 17, Chicago, IL 60601 or Shriners Hospital for Children, 2900 Rocky Point Dr., Tampa, Florida 33607