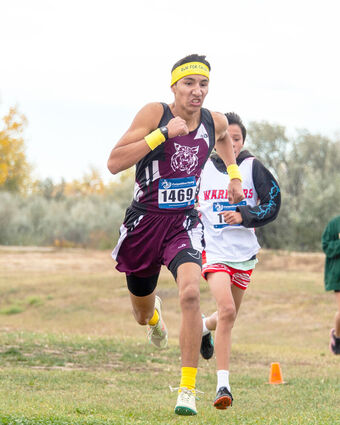 Landen Gray makes an incredible push down the stretch during the boy's race at the Harlem Invitational Cross Country Meet Friday morning at the Harlem Golf Course.

The Chinook Sugarbeeters, Harlem Wildcats and Hays/Lodge Pole Thunderbirds concluded the Cross County regular season this past Friday at the Wildcat Invitational in Harlem. The Wildcats recognized the efforts of their four seniors prior to getting races started Saturday morning.

The Wildcat invitational was set up at the Harlem Golf Course just south of town and provided a fantastic setup for runners to challenge themselves as they head to the State Cross Country Meet in Missoula this Saturday.

Chinook senior, Anna Terry has led the way for Blaine County runners this fall and turned in another fantastic effort on Saturday. Terry finished fourth in the field with a personal best time of 19:30.73. In the process Terry finished first amongst Class C runners defeating Whitewater's Shelbi LaBrie for the first time this fall. Terry and LaBrie raced to the finish line down the stretch with Terry winning the final push. LaBrie crossed in 19:32.82. Terry will enter the State C Cross Country meet with the fourth fastest time in the State Class C.

Chinook has qualified all five runners for the State Meet in Missoula this weekend. Freshman Emma Klingamen finished fourteenth in Harlem Saturday with a time of 23:05.43 and has shown steady improvement all season long. Freshman Kirby Hofeldt was next to finish for the 'Beeters turning in a time of 25:45.04. Sophomore Jeni Mord soon followed clocking in at 25:58.19. Junior Ryley Hofeldt concluded her regular season with a time of 26:10.46.

For the boys it was Harlem senior Landon Gray leading the pack for our local runners. Gray finished fifteenth in the race with a season best time of 19:52.00. Hays/Lodge Pole senior, Daniel Henry was next to finish, crossing the finish line in 20:15.30. Wildcat junior, Moses Lawrence finished the race in 21:05.13. Harlem senior D'Lonte Farrar was close behind at 21:13.69. Junior, Kelbi Bigby was next to finish for the Wildcats with a time of 21:53.21.

This was the first season for the 'Beeters competing in Cross Country and their lone senior was thrilled to be a part of the experience, "First and foremost, I am very grateful for the opportunity to run cross country for Chinook High School," said Terry. "I am super proud of this team, and I think they have laid a solid foundation for the future of Chinook Cross Country. "

Terry has high hopes for her first and only State Cross Country meet, "Right now, I am very confident going into state. Every week the team shows up and puts forth great effort and determination, and that will definitely pay off at state."

Individually Terry has worked hard through the off season leading up to this point, "Personally, I have been very pleased with the times I've posted, and I hope to shave even more time at state. I definitely have my eyes on the podium and hope to bring home some hardware for the first time in Chinook XC history. Based on what I've heard about the course, it definitely won't be easy. There is a big hill about halfway through it, but I trust our training and know that we can be competitive at state."