Philipsburg has more than just a famous candy store 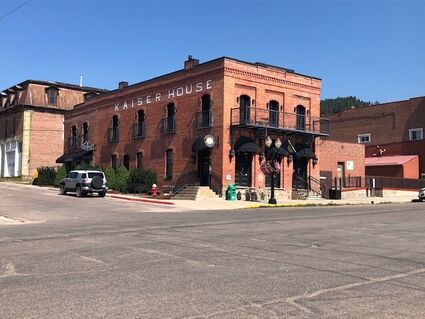 Kaiser House was built as a hotel in 1881. It was restored a few years ago, after several other uses, to serve again as a hotel. Philipsburg's downtown is restored or repurposed to recreate the old mining district. The town is full of interesting shops, eating/drinking establishments, places to stay over and historical information.

Alert readers may recall two of my recent stories (visits to Anaconda/Butte and Basin) were about what we saw on a "surprise tour of Montana" for my wife's birthday. The following story is about the first stop on that trip, a two day visit to Philipsburg which is located between Missoula and Butte, south of the Flint Creek Mountain range. I'd only heard of Philipsburg in connection with TV ads for the town's famous candy store, the Sweet Palace. Our travel agent, Keri Hanson, said "I think you both would enjoy a visit to Phillipsburg." After two days visiting I can say there is a lot more to Philipsburg than just a famous candy store and we both did enjoy our stay there.

From mining to tourism

Philipsburg is located on Montana 1 south of I-90. Approaching from Drummond (heading south), the immediate area around Philipsburg is typical of many Montana towns-small hobby ranches and random houses, a few retail businesses catering to travelers and stores serving ranchers. But once you enter the downtown, it's like going back to the 1880's. Hard rock mining, initially for silver and later for other minerals, began in and around the Philipsburg area shortly after the Civil War ended. The town grew and catered to visitors to the mines in the surrounding mountains, supplied the mining companies and provided everything from saloons to rooming houses and cafes for the miners themselves.

Most of the downtown buildings still standing were built prior to 1900. Some structures have been repurposed for shops, bars, eating places and small businesses. Others, like the Kaiser House (hotel), were refurbished and still serve their original purpose. We stayed at the Kaiser House, built in 1881 originally with hotel rooms upstairs and a dining room on the street-level floor. Currently the hotel has four rooms upstairs and the former dining area is now an upscale gift shop. Each morning the owners make a breakfast for hotel guests, served in a common room upstairs overlooking the whole of the restored downtown.

A couple of businesses focus on items incorporating gems, especially sapphires. Most of the gems come from the surrounding mountains, one business operates a mine where visitors can pan or dig to find their own stones. After labor day that mine closes but another gem store downtown still has operating sluice boxes where customers can buy a bucket of gravel and pan for gems. With morning temps at around 30 standing for hours over a sluice box, up to my elbows in icy water, held little appeal. Instead, I took a long walk around town.

The town has many church buildings outlying from the restored downtown. I found the old Presbyterian Church (that congregation is now in the original Methodist church building). I started to walk in when a lady came walking out with a suitcase. She explained she and her two sisters were staying at the Airbnb now housed in the church. She invited us in to take a look...the building had been modified so two suites were downstairs, in the old Sunday School rooms, and the balcony had been rearranged in to a suite with a balcony overlooking the old sanctuary. The transformation was very well done.

I mentioned the famed Sweet Palace, a huge store on the main street downtown with just about every candy you could imagine. Our second day in town had warmed a good bit so we were drawn to the Phillipsburg Creamery, an ice cream shop serving homemade ice cream, made in a machine adjacent to the sales counter. LouRae Weber and her husband own the business. The ice cream making machine is a replica of one pictured on a 1904 post card her husband found. LouRae said, "He wanted something unique in the store so he had these old churns made like those pictured on the post card.

The Webers have operated the store in Philipsburg for five years and earlier had a previous ice cream store for 25 years in another tourist town. She was an interesting character. When she learned my wife was a retired pastor she said, "I went to seminary as well. First I was a hospice chaplain and all I saw was 'crying and dying.' We started selling ice cream and now I experience 'living and laughing.' I don't see changing jobs again". She explained they can make 25 flavors but only have freezers to sell 16 flavors at any given time. It was great ice cream and the connect with the ice cream shop in Chinook was sort of interesting with the similar business name and owners with the same family name.

Phillipsburg was interesting. But for me the most fascinating place to visit around Philipsburg is Granite Ghost Town State Park. It's located at 7000 feet elevation via a rather difficult three mile mountain road. But once there, it's a fascinating place to poke around. Established in 1875 to mine silver the plus half-acre site once housed two full blown silver and gold mining operations. During that period about 3,000 miners and their families lived on the mountain on building sites leased from the mining company for $2.50 a year.

Readers, don't put too much in to the "State Park" part of the title. There is no improved road to get there and no markers on any of the few remaining structures or paths. There are no bathrooms, no picnic tables and no signposts or plaques explaining things. There are well worn trails (likely side by sides, four-wheelers and smaller off-road vehicles) that appear to follow what might have been actual city streets back in the day.

The Miners' Union Hall was one of the major buildings facing the main street that came up from Philipsburg below. 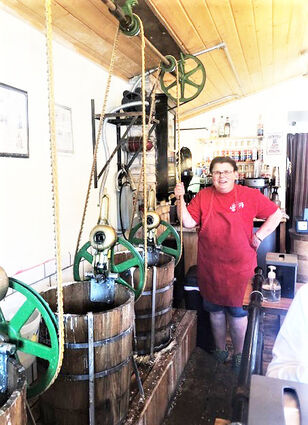 LouRae Weber and her husband own the Philipsburg Creamery, an ice cream shop. She's pictured in front of a replica of an 1890's ice cream making machine the couple had custom built and use to make their ice cream. The ice cream machine sits next to the counter where the ice cream is served.

All that remains now are some exterior walls but at one time the building housed the union offices, some street level businesses and, most importantly, a dance hall on the second floor with a maple floor said to have a "bounce effect" for dancers. It's not hard to imagine a crowd out on the street lined up for the big dance on Miner's Union Day, June 13th.

Because flat space was in short supply around the mining complex not all of the ore could be processed on the mountain. Some was transported via a 9750 foot gravity feed tramway to the Bi-Metallic mill near Philipsburg. From 1882 to 1903 it was reported the two mines at Granite Mountain produced upwards of $45 million worth of silver and gold and paid $15 million to stockholders in the same period. Not hard to understand why it was said, "Nothing ever closed, northing ever stopped in Granite, Montana!"

It was a great two days in Philipsburg, a place we really knew nothing about. I was reminded of a quote by the Dalai Lama related to a reason to travel: "Once a year, go somewhere you've never been before." If you haven't been to Philipsburg yet, it would be a great place to go this coming year.