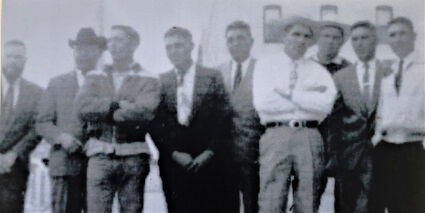 This family photo, probably taken in the late 1950's, shows all nine LaTray brothers, part of a large family that once lived in Chinook. From left to right are: Alex; Bud (the oldest); Robert (the youngest); Joe; Ernest; Donald; John; Orville and Harold (the last surviving brother).Eight of the nine brothers served in the U.S. military, four during World War II. All safely returned home from military duty.

Several months ago Shirley Gardipee, a former Chinookian now living in Shelby, told me about the LaTray family that once lived on the north side of Chinook. William and Jenny (Gardipee) LaTray had 18 children, nine were boys. Eight sons served in the U.S. military, four during World War II and all eight safely returned home. The following story of the LaTray son's military service is a reminder of the service of all our veterans during this runup to Veterans Day, 2022. But first, a short history about Veterans Day.

Readers of a certain age may reme...