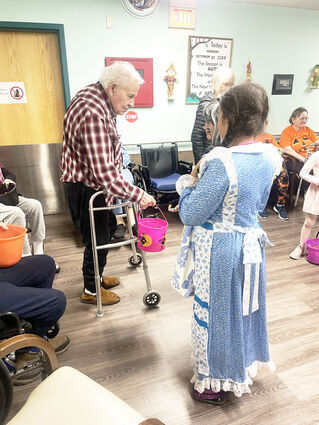 The Sweet Home staff and residents have been busy over the course of the summer and into fall. Residents have had plenty of fun interacting with folks in the community while attending several events. The Blaine County Fair, Picnics in the park and special Sundays featuring BBQ, music and family highlighted a great summer.

Fall quickly set in as the calendar turned to October and while it's technically not Winter yet, we have certainly experienced the conditions. Sweet Residents made their last venture outdoors before the cold set in by attending the Sugarbeet Festival Parade in early October. John Haldeman and Terry Vogel took in the Blaine County Cruisers Car Show earlier in the day. John was especially pleased to see his truck on display at the show.

The Sweet Home Activities Department planned several Halloween themed activities for the Residents during the month of October in anticipation of seeing the many young costume clad Trick-or-treaters Halloween night. In addition to Pumpkin Decorating, they also enjoyed such activities as Leaf Painting, Bible Study and even had a coffee with a few Chinook Police Officers and Sheriff's Deputies

Halloween was a huge success and was thoroughly enjoyed by the staff and residents alike. The single most enjoyable time the residents have is when family and friends stop by to visit. When 147 Trick or Treaters and their parents swing by and they get to pass out candy, while dressed up, well I'd say that's right at the top of the list. On Halloween night the Sweet Home staff and residents did their best to make sure every trick or treater got a piece of candy. Certainly, the idea is to celebrate the day and see all the kids and their costumes, but seeing the Residents interact and enjoy the evening was just as exciting. As the youngsters made their way through the halls, Residents took time to visit with as many of them as they could.

The Sweet Home has several residents that are United States Veterans and hopes were to bring as many as possible to the Chinook High School auditorium for their Veterans Day ceremony. However extreme cold and slippery conditions dwindled the number down to two. Bill Goodman served in the US Army in Korea in the early 1950's and Ray Reid, one of the few remaining World War II Veterans in Blaine County were both in attendance. 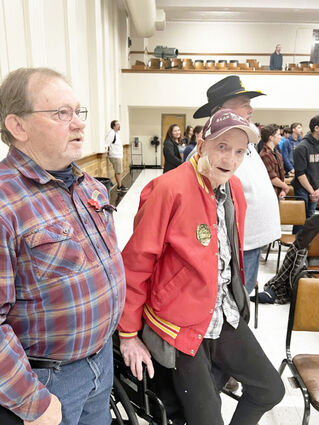 Ray has been actively involved with the local VFW Chapter for more than seven decades and proudly took his seat on stage as Commander of the Chinook VFW. Bill Goodman proudly stood in front of his wheelchair and sang along with the Star-Spangled Banner. Both received thanks from everyone in attendance. Chinook High School students, local community members and many local Veterans attended the ceremony and thanked these two for their service.

The weather may limit the amount of time the residents get outside but with Thanksgiving this week, Christmas just a few weeks away, it's safe to say they will continue have plenty of opportunity to gather and have fun with friends, family, other residents and the staff.