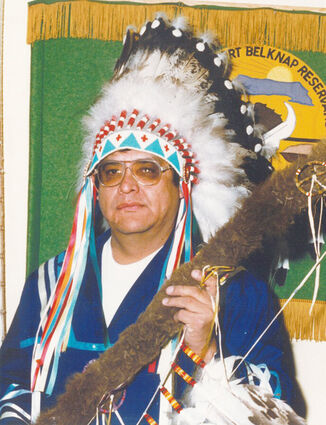 Charles "Jack" Delano Plumage, Hamaza "Iron Horn", a proud member of the Assiniboine Tribe passed away on Sunday, November 13, 2022, at a physical rehabilitation center in Great Falls, MT. Jack was born on September 19, 1946, at Fort Belknap Agency to Joe & Frances Horn Plumage. Jack graduated from Harlem High School in 1964 and later enlisted in the U.S. Army on May 11, 1966, where he served in Vietnam. He was honorably discharged May 10, 1968. After returning home, Jack attended the University of Montana where he became an avid and loyal Griz Fan. Jack met the love of his life, Dolores. They married on March 14, 1975. Jack & Dolores made their home at Fort Belknap where he held various Tribal jobs. He was on the Tribal Council starting in 1974 and served as Tribal President of the Fort Belknap Indian Community Council from 1976-1980.

He later became the Administrative Officer at the Bureau of Indian Affairs and from there he transferred to the Indian Health Service as the Service Unit Director. One of Jack's passions was being a coach and mentor, starting with little league baseball majors & minors and high school boys & girls' basketball. He embodied the true definition of being a coach. He was a mentor, teacher, father figure and confidant. The one thing he thoroughly enjoyed was the game of golf. One of his greatest accomplishments while playing golf was getting 2 holes in one. Hunting was also something he enjoyed. Jack also served on the Harlem School Board and always believed in the civil rights for Indian People.

Jack participated in our Indian ways and loved his Lodge brothers & sisters. Jack is survived by his wife Dolores, his children Mary Frances Plumage, Charles Plumage, Christopher (Sunni) Plumage, Steve (Kimba) Munford, Joe (Stacey) Ironman Jr., grandchildren Sage, Landen, Max, Danielle, Johnny, Montana, Christopher & Brody; Sister Cathy Swain and brother Walt Plumage, and his twin sister Cheryl "Jill" Plumage who lovingly donated a kidney to her twin brother Jack. The family is forever grateful for this gift she selflessly gave to Jack and we will be forever grateful to her. Jack was a loving uncle, brother, dad and husband. Those who proceeded him in death are his parents, Joe & Frances Plumage, Glorain Crantz, Wendell Plumage, Tony Paul Plumage, Joe "Chick" Plumage, Arnold Plumage, Waldo Plumage. Please accept our apologies if we have left anyone out and know that Jack loved each and every one of you. Arrangements have been made with Wilderness Funeral Home.