Community Dinner, A Blessing to Many, Serves 195 Meals 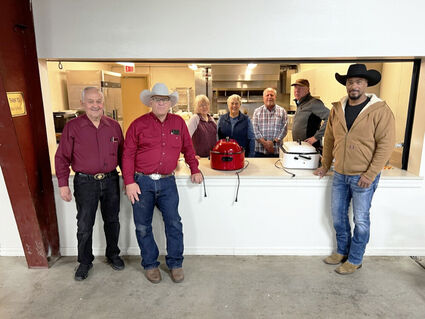 The Annual Community Thanksgiving Dinner was once again held at the Blaine County Fairgrounds Commercial Building. A Great group of volunteers was on hand to serve 195 meals including a record 130 take-out and delivery orders.

"We cooked seven turkeys originally because that is what we have done in previous years," said Betty. The past two years the Community dinner featured Ham but the decision to return to the traditional Turkey Dinner was made this year. "We ended up having to order three more 10 pound turkeys from Finley's when we found out we had so many take-out orders. We ended up with 130 take-out and delivery plus 65 in house for a total of 195."

The Side dishes were plentiful but there was concern with Turkey running low towards the end, "We had just a 1/2 gallon zip lock bag of turkey left. I think we may have over done it a bit in the takeout/Delivery because we included both white and dark meat in those. So I was pretty surprised to see how close we came with the Turkey in the end, a little too close for my comfort anyway. We had plenty of green beans, gravy potatoes, yams left," stated Betty.

Billmayer was pleased with the community turnout, "We have always kind of been around the 200 mark as far as what we plan for. I think deliveries were really above normal. Covid may have had an effect on that with everyone getting used to having things delivered. Betty would like to see that change in the future, "I would really like to see us get back to more in house with the meal. I think people like to get out and get together and visit over a meal and it was really nice to see those who did sit down and eat really visit and laugh and have a good time."

The Commercial Building has been a great place for the organizers to put together the Community Dinner, "The fairgrounds is really a benefit the space is really nice we can kind of spread out with what we are doing, and we don't interrupt with what the senior center is trying to," commented Billmayer.

Looking back on the day, Betty added one more thing to her list of things she was grateful for, "I am so thankful we decided to cook the turkeys a day early because those took all day. Mark and I put the turkeys in at seven in the morning thinking we would be done by two in the afternoon, but they took so long to cook. Then we made the decision to add the three extra turkeys and we continued to monitor their progress throughout the day when some were done we noticed others needed more time. Jay and Mark would carve the turkeys as they got done and then Mark and I went over and got the last turkey out of the oven and carved at 10:30 Wednesday night. I was grateful we decided to cook early."

Betty concludes by saying, "Once again we had such a great group of volunteers both Wednesday and Thursday and we couldn't do it without the volunteers from the community and it just makes it a really fun time. And the money that comes in each free will donation covers the cost and ensures we can do it again the following year."