Humor for the Holidays Is Onstage at MAT Theatre 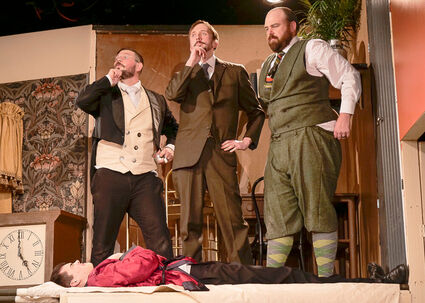 In cooperation with Scharfe, Kato, & Company, the Montana Actors' Theatre will be presenting The Play That Goes Wrong in several performances this month. Although the play opened with a Red Carpet Gala on December 9, other performances are slated for December 15-17, and 21-23 at 8:00 p.m. A matinee showing will also take place on December 18 at 2:00 in the afternoon at the theatre in Cowan Hall on the campus of Montana State University-Northern.

The play by Henry Lewis, Jonathan Sayer, and Henry Shields features opening night of the Cornley University Drama Society's newest production: The Murder at Haversham Manor. As the acting troupe tries to pull off their production, things quickly go from bad to utterly disastrous. The accident-prone thespians battle against multiple obstacles to make it through to their final curtain call, with hilarious consequences. Described as "part Monty Python, part Sherlock Holmes," this theatrical performance promises comedy sleuthing at its finest.

Members of the cast include eight actors and actresses:

Tickets are available locally at Havre Chamber of Commerce, The Computer Center, and Bear Paw Meats. They can also be obtained online at mtactors.com.