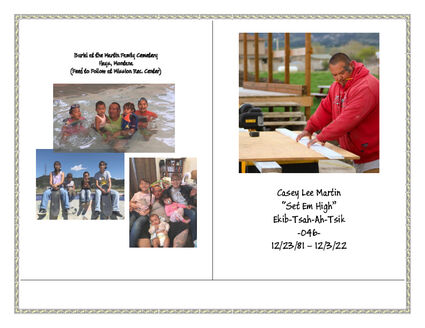 Casey was born to Gerald and Sheila Martin on December 23, 1981, at the Fort Belknap Hospital. He attended grade school at Lodgepole Elementary and graduated from Hays/Lodgepole High School in 2000. Casey enjoyed boxing, little league baseball, basketball, football, and track. He was a good athlete and strived to be the best. He was also a very talented drawing artist. After graduation he attended MSU-Northern where he was a redshirt freshman on the football team. He soon found out that school was not where his heart was. Working was his true passion. In 2001 he started his first job as a laborer at the Zortman-Landusky Mine. This was beginning of his long and hard-working career. In 2006 he and Shellee Main started their family. They welcomed their first child, Rylee Jo. Together they brought three more beautiful children into their family. Aliyah, Kenzie "Bob" and Emmitt. His kids were his pride and joy. In 2018 Casey started his own business called "Martin's Construction". He had many helping hands throughout his business journey. He was always humble and gave all credit to his "crew". They also built the elderly decks and remodeled the bathrooms. They worked with Matthew Roberts and Jonas Flansburg in Billings. Their current project is the Matador Ranch Casey is survived by his children Rylee Jo, Aliyah Rae, Kenzie Lyn-Marie "Bob", and Emmitt Gerald William, wife, Michelle "Shellee", his parents Gerald and Sheila Martin, Tiny "his other dad", his brother Nathan (Danielle), his sisters Drew (Josh) Turnsplenty, and Kallie (Michael) Crantz, his special friend Alisha Werk, his grandparents Ken "Punky" (Marjorie) Doney, Grandmother Margaret Martin, his adopted brothers and sisters Dean Moccasin, Chance Main, Clint Werk, Chris Ballard, Amol Belgard, Joe Longknife, Ike Jiron Coshaun Snell, Lacy Horn, Sunny, Supreeya, Pink, Lilly, Storm Johnson, and Curry Small, Godparents, Doug and Donna Sullivan. Extended Family Paternal: The Boy family, Hawley family, McConnell. Maternal: Bell family, Longknife family, Doney Family, Backbone Family and Gone Family Proceeded in death by his sister Roshell Martin, Grandparents Georgialee Longknife, Harold "Prune" Martin, and his uncles Kenneth Doney Jr. and Darrell Martin. With a little humor Casey joked one time saying for his funeral he wanted the Dallas Cowboys to be his pall bearers so they could let him down one more time.