Christmas Past, Then & Now 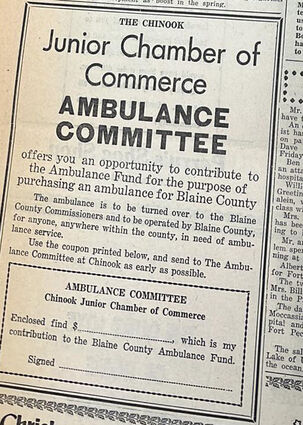 The Holiday season is a joyous time, and after a couple years of pandemic related issues the season is again being celebrated across the county. The Community Dinner was record setting, schools are holding Christmas concerts and holiday themed events are happening in Chinook, Harlem, Fort Belknap, Hays, Lodge Pole and Turner. The Holiday spirit seems alive and well.

The Holidays weren't always relevant in Blaine County, especially 100 years ago when Christmas and Thanksgiving seemed to be more of an afterthought. Looking through the four issues of the paper published in December of 1922 only two articles referenced any sort of Christmas gathering, one regarding the church's getting together prior to Christmas and one saying the gathering was a success. There was a fairly good size article on recipes for the season highlighted by a 'Old Fashioned' Strawberry Shortcake concoction.

The remainder of the paper was filled with more than a 1,000 names of people delinquent on their taxes. Those names took three full pages in the paper and ran for three weeks. There were at least four murders that were reported on plus a case of an officer putting five rounds in a suspect, 'Marshal puts five shots in Talbert, but he may survive'. Another killing involved a man being shot on his property for not paying his mortgage.

1922 was a violent time, in another incident a 14-year-old girl fired rifle rounds into a gathered crowd of women and children wounding 24 women and two children after a boy called her names. She was upset and stated, "I'll do anything to defend my dad. Her father was a strike buster who had been assaulted and stoned days earlier by railroad strike sympathizers and her and her family were routinely called out for it. A son admitted to killing the hired hand AFTER his dad was just convicted in the first-degree murder. Lastly there was a huge prohibition raid resulting in many arrests. Not a lot of Holiday spirit for sure.

75 years ago, the December 1947 issues were decidedly different. Sports were prominently featured, especially basketball and included not only high school action but a Chinook VFW team that played other veteran groups from around the region. Another huge story featured often during the month of December was an all-hands-on deck drive to raise funds for an established Ambulance to operate in Chinook and Blaine County. The Junior Chamber of Commerce ran many ads asking for donations. The advertisement stated, "The Ambulance Committee offers you a chance to contribute to the Ambulance Fund. The ambulance would be turned over to the Blaine County Commissioners and to be operated by Blaine County for anyone, anywhere within the county in need of ambulance service." This drive also included an airplane that dropped more than 15,000 pamphlets over Blaine County to help spread the word.

The 1947 editions also contained several stories on local school plays, concerts, church bazaars and more. The JC's as the headline read also held a Christmas Stroll down main street. More than 50 businesses in Chinook alone ran Holiday Greeting ads including Buttrey's, Blaine Bank, Ben Franklin of Chinook, Woodwards, The Orpheum Theatre, Monarch Lumber, Gambles, The Montana Hotel, Herbs Toggery and the very first Jamieson Motor's Christmas ad. Needless to say if there was anything nefarious going on, it was hidden pretty good amongst a ton of holiday spirit. 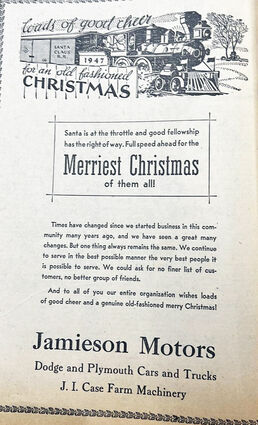 50 years ago, the 1972 December editions continued to carry on the standard set in 1947. Holiday ads filled the pages, school plays and concerts were again well covered as were sports. Featured on the front page was the 1972 Chinook High School girls' basketball team which had just completed a perfect 11-0 regular season. The spirit of the Holiday season was definitely alive and well in 1972. The population of Chinook, Turner, Harlem and Blaine County as a whole may have diminished. There may be fewer businesses and we may have issues we are all dealing with, but the holiday spirit is certainly alive and well in 2022. It seems to be that 2022 is probably a little better place to live than 1922. Happy Holidays, Merry Christmas and Happy New Year.