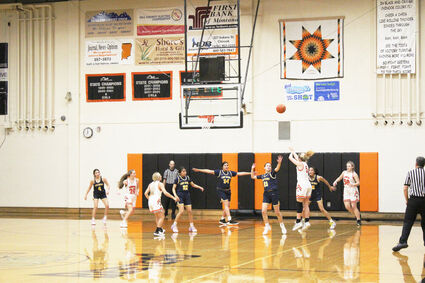 The Holiday break seems to come at just the perfect time in a season for fans to catch their breath and contemplate over family or social gathering what went right and what went wrong with their favorite high school team. For Coaches and players alike they may have a totally different take on the situation, depending on how the season has gone thus far.

Some coaches would prefer to keep going, "We're hot right now, we got thing moving right along." While others may have a different approach, "We are really out of sync right now. We can use this break, get things corrected and be ready to go in the new year." Whatever the approach may be, there is no getting around it.

Looking at High School Wrestling first, the Chinook Girls and Boys have their team functioning at a high level. Individual titles have been won and the coaching staff has been pleased with the teams overall performance and growth.

Chinook senior Tyler Schoen is currently ranked No. 1 at 182 pounds in the Class B/C Power Poll, senior Lane Snider is No. 4 at 145 pounds.

The Harlem Lady Cats won their season opening tournament and have continued to perform well on the mat to the joy of the coaching staff.

In Girls Basketball, the Chinook Sugarbeeters have hammered their first four opponents in starting 4-0. The 'Beeters currently sit at No. 7 in the State C Power Poll. The Hays/Lodge Pole Thunderbirds won their first three contest and currently sit at 3-2. The Harlem Lady Cats are 1-4 and the Turner Tornadoes 0-5 heading into the break.

In Boys Basketball the Turner tornadoes sit at the top of the Blaine County Boys standings. Turner is 3-0 in non-conference clashes and 1-1 in the District 9C. The Hays/Lodge Pole Thunderbirds are currently 1-4 overall and 0-2 in the District 9C. The Chinook Sugarbeeters are 0-4 (0-2) and the Harlem Wildcats sit at 0-5 overall, 0-2 in District 2B.