Ballots to be sent out to Recreation District Seeking Approval of $750,000 Bond 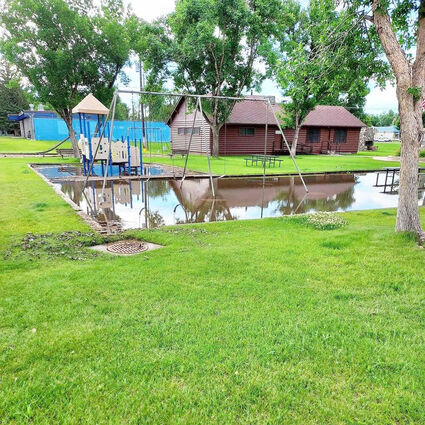 A pivotal moment is upon the community of Chinook for the Friends of the Pool and Park Foundation (FOPP) to take a giant step forward in their goal of fixing the local pool and park. The Blaine County Commissioners approved the creation of a Recreation District in October, and the organization has helped propose a bond initiative to seek funding for the project. Ballots will be mailed January 17th to those taxpayers in the Recreation District that own a home, mobile home, or business. The FOPP states, "The proposed tax is less than $50 per year and the ballots are due back on February 14th. Farmers and Ranchers in the Recreation District will only pay per home not per tax-bill." "The FOPP has worked diligently to make this a reality and the time is now, we hope the community will share their love for the Pool and Park and vote yes by mailing their ballots back by Valentine's Day," states Katie Unruh, Foundation member. The FOPP adds, "If you would like to know what your potential assessment may be, you can contact the Blaine County Treasurer at 357-3280."

The FOPP felt the need to create a Recreation District was not only needed, but overdue, "Most communities have a Recreation District as well as a Parks and Recreation Department; however, Chinook has neither. This enables the community to pass the Bond to complete the needed repairs to the Chinook Pool and Park." The Recreation District includes voters in the Chinook School Districts and one of the organization's main goals is to be transparent in how funds raised are used, "We want people to know their hard-earned dollars given through donations go completely towards this project as a whole and the bond will only be used for the repairs to the Pool itself. These funds mean so much to the foundation and they are beyond grateful for every cent that has been donated to the project thus far. We want the community to know where their fundraising dollars are going and we welcome the community to come to any meeting and look at our Profit and Loss statements," states Jessica Aberg, Foundation Treasurer. Should the bond pass, a Recreation District Board with appointed members will oversee the bond income and expenditures.

The FOPP was formed in June of 2020 and has been hard at work fundraising ever since, consisting of local community members whose main priority is to fix the antiquated Chinook Pool and Park facilities. In just 30 months, the foundation has raised more than $200,000 which breaks down to $6,600 per month. While that amount is staggering for a community of our size, the FOPP reminds everyone that there is still a long way to go.

The Chinook Pool was originally built in 1976 and 47 years later it is certainly showing its age. Every new breakdown sees costs skyrocket and parts are becoming unavailable or impossible find which will lead to repairs not being able to be made if not updated. The FOPP hired an Engineer that specialized in pools to assess the repairs needed. The FOPP addressed the report the firm provided, "Upon his visit, he determined that the pool has started to leak based upon the information provided by the City of Chinook. His analysis was based on how often water must be added to the pool throughout the summer. With calculations, the pool filling has exceeded regular evaporation; therefore, he believes that it has started to leak. This Engineering Report is available to view on the FOPP website at: http://www.chinookfriends.org. Included in the report was a detailed estimate to implement all the repairs necessary to repair the facility and determined that the repairs to the pool alone are slated at $1,550,000 with repairs to the park at $380,000. The FOPP stated, "When it rains heavily, the park often floods due to drainage issues and a large portion of the playground equipment has been removed for safety reasons. This stated figure does not include the Splash Pad or Water Slides concepts, something the organization plans to fundraise for with grants and donations. The proposed bond will only pay for the repairs to the Pool."

The FOPP is asking taxpayers in the Recreation District to pass to pass a bond for $750,000 that when combined with funds already raised to apply for a $1 million grant through the Montana Land Water Conservation Fund. That grant application is due this spring and is now only offered every 3+ years. Sadly, there are very few large grants available for pools but the organization's Grant Writer believes Chinook to be a strong contender for this specific grant. Like many grants, this one requires matching funds, meaning if the grant requests $1 million, there has to be a million dollars on hand by the applicant to match. With the $200,000 already fund raised the FOPP is $50,000 shy of the $250,000 needed to be included in the match should the bond pass. However, the FOPP stated, "Jeff Ament, guitarist from the band Pearl Jam and originally from Big Sandy, has made a pledge to put a Skatepark in Chinook with the help of the Lions Club, which now puts the foundation over the needed amount to apply, should the bond get passed."

If the Bond does not pass FOPP states that it would be detrimental to the project's progress, "If the bond doesn't pass, the nonprofit must raise $1,550,000 to fix the pool alone. It will take them 234 months at this rate they have been fundraising ($6,600 a month), which equates to 19.57 years, not considering inflation and rising costs. Therefore, the FOPP needs the community's help in passing this bond."

The FOPP explained that the reason the bond includes the Chinook School Districts is because those homes within the area would be the ones likely to utilize the park and pool facilities. "We felt that it wasn't fair to just include the people that live inside the City Limits in the tax. The people that live on the opposite side of the Dike Road and those that live on Stockyard Road, those that live outside of town, would not have been included. Therefore, we felt that those that go to school here would be a better fit for the tax, making it more affordable for everyone in the community as well."