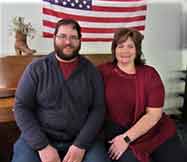 Malcolm Obresley, of Havre, poses with his Aunt Kasie McIntosh of Chinook. Malcolm, who was diagnosed with a brain tumor about a year ago, shared his story at the May meeting of the Chinook Cancer Support Group. After six weeks of proton beam radiation therapy, a fairly new cancer therapy, he's back at work with a good prognosis. Kasie invited her nephew to present "Malcolm's story" to the local support group

Malcolm Obresley, a twenty-eight-year-old resident of Havre and a

conductor for Burlington Northern, shared his experience as a cancer

survivor at the May gathering of Chinook's Cancer Support Group.

treatments that lasted for half a year. Happily, Obresley's prognosis

is great, he's back to work and doing things he always did before his

bout with cancer. He's the nephew of Kasie McIntosh, who invited

Obresley to share "Malcolm's story" with the Chinook group...