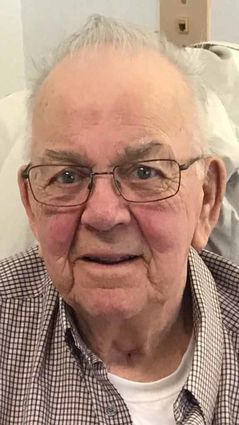 Ernest Larson passed away on July 13, 2018 due to natural causes and is now in heaven, with his Lord and Savior Jesus Christ, for eternity. Though much sadness is felt by those who knew and loved him, we now rejoice as this isn't goodbye, but until we see you again...

Ernest Larson was born in Oklee, MN, to Bennet and Helga Larson, on May 10, 1932 on the family homestead and was #8 out of eleven children. He truly enjoyed the farm life even though it was very hard at times. Ernie lost his dad when he was a little boy as his mother was expecting the youngest child. All of the kids had to grow up too quickly; they had to run the farm, take care of their sick and wheelchair bound mom and took turns going to school. Ernie graduated from Oklee High School in the spring of 1950 and headed out to start his adult life.

Ernest started driving west, in his model A car, as he ran out of gas and money in Chinook, MT. He was then hired on, by Pehrson's, to earn gas money. Next, he worked for the John Jergeson Ranch from the summer of 1950-1953. He adored their family and they created a lifelong friendship.

Ernie then met Artista, they dated and were married on September 20, 1953.

In 1954, Ernest became a partsman and co-owner of Chinook Equipment until this partnership came to a close in 1971. At this time in 1971, Ernie and his wife, Artista, decided to purchase the Gambles Hardware, Appliance and Furniture store and then eventually sold the business in 1985 to Russ and Rosella Skones.

During this time of ownership, Ernest opened up Larson's Furniture in 1973 until he liquidated the inventory, sold the building to Marvin Edwards and retired on his 70th birthday on May 10, 2002. Ernie was an extremely hard working man, a loving husband to Artista for 64+ years, a dedicated and giving dad to his 4 children and an amazing friend to so many.

Ernest's last 13 months were lived out at the Sweet Memorial Nursing Home right along side his wife. He will truly will be missed by his family, his friends and the small town, of Chinook, which he called home for the past 68 years. He was a strong pillar of this community and Chinook, MT won't be the same without him.

He's preceding in death by his parents and all of his 11 siblings except for 2 who are still living; Elna Halle and Bennet Larson, Jr.

A memorial service will be held on Saturday August 11, 2018 at 11:00am at the American Lutheran Church in Chinook, MT.