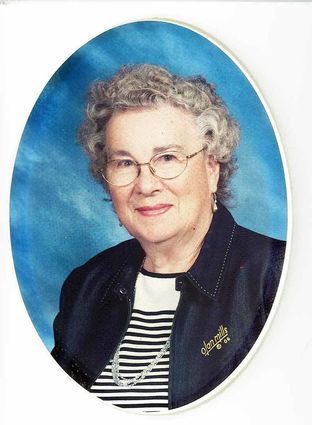 Blanche Moxley Warburton passed away of natural causes at the Sweet Memorial Nursing Home in Chinook on August 24, 2018.

Blanche was born at home January 30, 1923 in Rattlesnake, Montana to Curtis and Mildred Moxley. She was delivered in the family's small log cabin by her Grandmother Bloomer. She was the second oldest of six children. Growing up south of the Bear Paws on the family homestead, Blanche played paper dolls cut from the Montgomery Ward catalogs and walked a mile each day in the summers to attend the Rattlesnake School. She attended high school in Chinook, working for her room and board. During her junior year her best friend Norma Erskine introduced her to Wallace Warburton.

They married the February of her senior year and began building their ranch together south of Chinook, starting with their wedding gift of five heifers from Wallace's father Edgar and a horse from Blanche's father Curtis. Until graduating, Blanche would drive Wallace's car to school while he rode the horse to work for nearby ranches.

During their life together Wallace and Blanche had four sons, John, Dave, Mark, who died as a baby, and Blaine. The couple enjoyed playing Pinochle and attending country dances with neighbors around the New Hope school area, and attending brandings and inviting friends to their brandings, where everyone enjoyed Blanche's delicious tailgate lunches, especially her famous chocolate cake.

Blanche was known as an unusually beautiful and kind lady. She loved to cook and was a marvelous cook who enjoyed having family and friends over for dinner. She enjoyed gardening, canning, raising her chickens, and being with her grandkids and great grandkids as well as trailing cattle. Blanche could be seen driving her big, red 1976 Cadillac to town until her late 80s, after two hip surgeries and developing macular degeneration. She loved music and enjoyed playing the washboard in the Senior Center Kitchen Band and playing BINGO.

She is survived by....her sons John (Linda) Warburton, Dave (Lora) Warburton, Blaine (Joette) Warburton, sisters Eva Deyoung of Bozeman, Holly Harris of Tulsa, Oklahoma, brother Clair Moxley of Chinook as well as numerous grandchildren and great grandchildren. She was preceded in death by her parents, her son Mark and her husband Wallace.

The service for Blanche Warburton will be Saturday, September 1 at 11:00 a.m. in Chinook at Edward's Funeral Home.