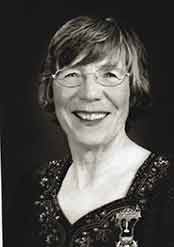 Barbara Rinke of Ronan, Worthy Grand Matron of the Grand Chapter of the Order of the Eastern Star in Montana made her official visitation to Northern Star Chapter No 23 in Chinook on Saturday, September 29 at 1:00 PM. The Worthy Grand Patron Jerry Williams of Shepherd accompanied her.

The meeting was preceded by a luncheon held at the Masonic Temple.

Other officers of the Grand Chapter present included: