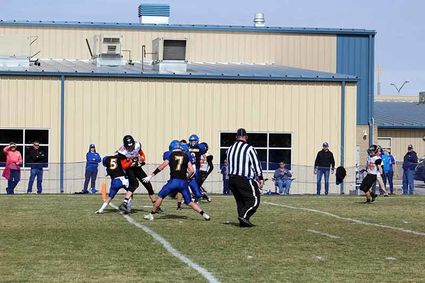 The Chinook Sugarbeeters turned in a valiant effort this past Saturday against the No. 4 ranked and undefeated Great Falls Central Mustangs. The Chinook defense forced five turnovers but in the end it was two of their own that led to two Mustang scores late in a 46-21 loss.

The 'Beeters defense was physical all day long and forced fumbles on Centrals first two offensive snaps of the game. Senior Brendan Edwards came up with the first and junior J.T Hauer the second but the 'Beeters were unable to capitalize deep in Mustang territory.

The Mustangs managed a score with 4:36 left in the first quarter to go up 7-0, maintaining the lead as the teams headed into second quarter of action.

Great Falls scored again just 1:08 into the second to extend their advantage to 13-0 but these Sugarbeeters had plenty of fight in them.

After an incompletion to begin there drive the 'Beeters struck quickly. Senior quarterback Trajan Hannum found senior Isaac Bell near the sideline for a 12 yard gain and then connected with junior Sam Dumas for a huge 43 yard gain down to the Mustang 11 yard line. Wasting no time Hannum then found Edwards in the corner of the end zone for a 'Beeter touchdown.

The 'Beeters covered 65 yards in four plays taking just :37 to complete the drive. The conversion attempt was no good but the 'Beeters had trimmed the deficit to 13-6.

Central used there power running game and after a short pass gave them the ball at the one foot line the 'Beeter defense stood tall, knocking the Mustangs back on first, second and third down. The Mustangs then went to the air and extended their lead to 21-6.

Chinook went three and out on the ensuing possession but after a good punt from Hannum it was again the physical 'Beeter defense forcing a fumble that was recovered by senior Karson Powell.

Chinook picked up a four yard run from Hannum on second down and then a short pass to Powell left the 'Beeters in another fourth down situation deep in Mustang territory. This time however it was Hannum making some nifty moves and finding paydirt on a 18 yard scamper. Following the conversion pass to Edwards Chinook was back within seven 21-14.

The game was then delayed for nearly 30 minutes as medical personnel tended to an injured Mustang player. When the game resumed it was Central that controlled the flow of the game marching down the field for a score just before the half and a 27-14 lead at the break.

The 'Beeters came out strong to start the third quarter methodically marching down the field. Hannum kept the drive alive with a hard run on third down to move the sticks.

Dumas then took a pitch from Hannum on an option run, moving the ball to the Central 21 yard line. Hannum then dropped back rolled right pump faked and then found Bell on a stop and go route in the corner of the end zone for a 'Beeter score. Bell then added the conversion on a drop kick and Chinook was back within six 27-21.

Central responded almost immediately with a 53 yard bomb to extend their lead back to 12 at 33-21.

Chinooks defense again rose to the occasion as Central was deep in Chinook territory. Senior Tye Mitchell recovered the 'Beeters fourth fumble of the game to give the offense another chance.

After turning the ball over on downs the defense was again put to the test and again they came up big as Hannum intercepted Central.

With time running out the 'Beeters were forced to get aggressive and the Mustangs brought the heat. Two late turnovers led to 13 Central points and a 46-21 win over the Sugarbeeters.

Head Coach Mike Jones was very pleased with his teams effort Saturday, "Last week was a good test for us against a good playoff team. We played a physical game and tested GFCC."

Looking ahead the 'Beeters fully understand the situation, "This week is going to be a tough game against a good Choteau team. We are in a "win and in" situation here this week. That is a testament to how good the north is overall," added Jones. "This game is going to be a physical game. We are preparing for Choteau just like we would prepare for any team, but we know that this means just a little bit more with a trip to the playoffs on the line."

The Montana Class C Eight-man football playoffs may be three weeks away, but for six of the 13 teams that make up the Northern C it may as well begin this weekend.

Six teams remain alive for the five spots granted to the Northern C Division. Seeded playoff games will take place this weekend and the Sugarbeeters are among them. 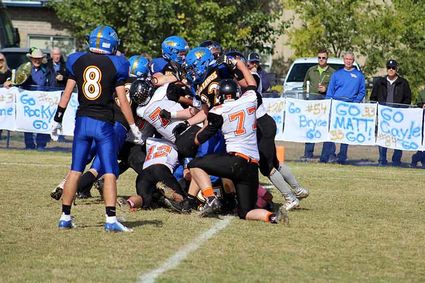 The winner of the Great Falls Central/Shelby gets the North No. 1 Seed while the loser is the North #2. (3B) Chinook will be on the road this Friday to take on the (2A) Chouteau Bulldogs. The winner of that game will earn either the North No. 3 or No. 4 depending on the outcome of the (2B) Centerville vs. (3A) Chester/Joplin-Inverness game.

The loser of the 2 versus 3 games will face off the following weekend with the winner earning the South No. 4 seed in the upcoming playoffs.

There are a number of scenarios that could have Chinook making the playoffs as the No. 3, 4 or 5 seed but the fact of the matter is they have to win one game in the next two weeks.

Chinook currently stands at 4-3 with there losses coming against the undefeated and No. 2 ranked team in the state, Shelby Coyotes. The undefeated and No. 4 ranked Great Falls Central Mustangs and the one loss Centerville Miners. The 'Beeters have proven they can play with the top teams and only time will tell if they will be able to get past them.