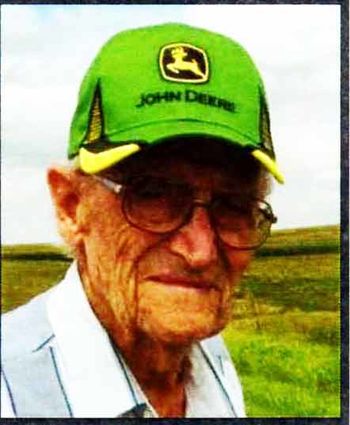 Hovey Molstad was born July 30, 1916 in Minneapolis, MN. He passed away August 13, 2018 in Valley City. Hovey was the youngest son of John & Mabel Molstad. Hovey spent his formative years in Valley City & Minneapolis before graduating from Dunwoody Institute in Minneapolis. After graduating he went to work for Deere & Webber in Minneapolis. He delivered some of the first diesel tractors to farmers in North Dakota, Montana, and Canada during that time with the company.

While spending time in Montana he met the love of his life, Alberta Anderson. The pair married on March 30, 1940 in Valley City and settled on his farm near Luverne. They later celebrated the births of their daughter, Charlotte and son, John. Hovey & Alberta had two other children who died shortly after birth. Hovey valued his friends, loved his family and was especially proud of his children, Charlotte and John. He is survived by John, three grandchildren, six great-grandchildren, and eleven nieces and nephews.