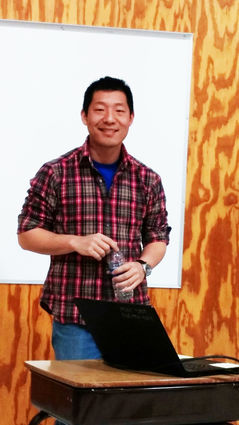 Space Public Outreach Team Member, Jason Zeng from Bozeman presented a program entitled Our Place in the Universe, to students in Zurich on March 19 and in Chinook on March 20.

At 10:56 p.m. EDT, with millions of people gathered around their televisions to watch or their radios to listen, Armstrong and Aldrin stepped off the lunar landing module, the Eagle, and became the first humans to walk on the surface of the moon. After the two stepped onto the lunar surface, Armstrong proclaimed these famous words: "That's one small step for man, one giant leap for mankind."

Hi-Line communities may not have access to an Air and Space Museum that will mark the 50th Anniversary of the lunar landing of Apollo 11 with events, programs, and exhibitions that celebrate NASA's iconic spacewalk. However, they do have access to the Space Public Outreach Team (SPOT). SPOT, which provides free presentations about current NASA missions and research to Montana schools, youth programs, and community groups, was in Zurich on March 19 and in Chinook on March 20. Amy Miller, the SPOT Manager, scheduled the three presentations during MSU-Bozeman's Spring Break, a time during which college students don't attend classes and can perform outreach work.

On Tuesday afternoon, Jason Zeng, a PhD candidate in Chemical Engineering at MSU-Bozeman, presented Our Place in the Universe to Zurich Elementary, Bear Paw School, and Cleveland School students in Zurich. The group learned about the moon, solar system, gravity, light, objects visible inside our galaxy, other galaxies, and the Hubble and James Webb Space Telescopes.

Lead teacher at Zurich School, Colleen Overcast introduced Zeng after directing the students gathered to be "champion listeners because there's lots to learn."

Zeng told these champion listeners that they are fortunate to live in Montana where the skies are not contaminated by light pollution. "Montana has some of the darkest skies," he said. "260 million of the 325 million people in the United States cannot see the Milky Way, so you all need to get outside this summer and look to the skies at night where you can see planets and constellations."

Zeng went on to explain that our universe is huge and that our galaxy is just one of billions. With current technology, like the Hubble Telescope which was launched in 1990, we are limited by our reach into the vast universe. Therefore, many of the pictures we see of space regions such as black holes and star clusters like the Eagle Nebula, which is an emission nebula-meaning that this nebula glows because of its own light-are actually scientific interpretations from light images. "Wavelengths of light create images," Zeng said, "and the pictures we see are interpretations derived from these images; they're not actual photographs. The James Webb Space Telescope, which hopefully will launch this year, will allow us to see further."

Although the Eagle Nebula, which scientists believe is a little older than 5.5 million years, is so named because it resembles an eagle, Zurich students saw several cats in the picture of the towering tendrils of cosmic dust that Zeng shared of the Pillars of Creation.

After Zeng's presentation, several students wanted an explanation for why Pluto is no longer considered a planet. Zeng explained that, according to the new definition, a planet is an object that orbits the sun and is large enough to have become round due to the force of its own gravity. In addition, a planet has to dominate the neighborhood around its orbit. "So, Pluto is no longer a planet because there are other objects in its path that are larger," Zeng told students.

Zeng shared Our Place in the Universe at Chinook Junior High on Wednesday morning and with Meadowlark Elementary just after noon.

SPOT offices at Montana State University in Bozeman and University of Montana in Missoula dispatch presenters to schools and communities across the state. These presenters are the outreach arm of the Montana Space Grant Consortium (MSGC), a NASA-partnered program charged with promoting and developing a strong science, technology, engineering, and math (STEM) base in the state.

According to MSGC Director, Angela Des Jardins, the focus of the program is professional training for higher education student presenters with mentoring by STEM graduate student managers, like Miller. Through this program, higher education students from across Montana utilize unique NASA content to become inspirational STEM role models for K-12 students and teachers. Although the research projects these students undertake are based on aeronautics and space, Des Jardins said that is generally not the career path students are headed down. They are college students pursuing degrees in STEM fields but focusing on workforce development training through NASA-sponsored research opportunities.

For example, Zeng is performing research on microorganisms from Yellowstone Park to turn excess methane into fuel or plastics or even electricity. He hopes the same technology might be used to make bioreactors for space to synthesize oxygen and carbon dioxide in space. These bioreactors could become life-support systems.

Established in 1991 as a component of NASA's National Space Grant College and Fellowship Program, MSGC is Montana's program in the consortium. MSGC is one of a national network of 52 Consortia, working to strengthen aerospace research and education in the United States. Members of the MSGC consist of institutions of higher education, business, industry and non-profit organizations. The Consortium works with these affiliates and through government and public outreach to expand opportunities for Americans to understand and participate in NASA's aeronautics and space programs.