Chinook Mother and Daughter Will Perform Again This Weekend 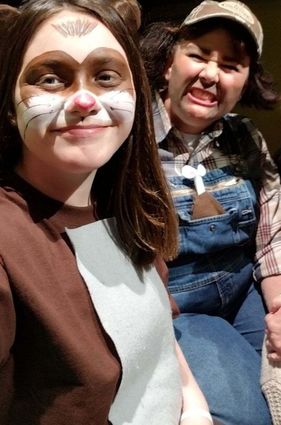 On Friday, April 5, Meadowlark Elementary students will be taking a field trip to the Montana Actors' Theater, the resident theatre company on the campus of Montana State University-Northern. The upper grade students who will be traveling for the evening performance will see the production of Fantastic Mr. Fox, not only for further exposure to a theater experience but because one of Chinook's fifth grade students, Mara Edwards plays a role.

In the show, which opened on March 22 and runs through Sunday, April 7, Edwards performs as Mrs. Weasel. She also serves as a stage hand. Mara's mother, Michelene Edwards portrays Boggis, one of the three adult cast members. Boggis is described in the script as a fat farmer, likely because he raises the best chickens on the farm and because "for breakfast, for lunch and for tea, he eats three," boiled and smothered with dumplings.

According to Kate Hagen, who co-directs the production with Bill Chambers, this show highlights the talents of MAT's younger members mentored by veteran MAT members. The cast includes a large age range of children, spanning from age seven to thirteen.

The MAT production Fantastic Mr. Fox is based on a children's novel of the same title written by British author Roald Dahl and published in 1970. Dahl's popular tale follows the vain attempts of three farmers: "Boggis, Bunce, and Bean, one fat, one short, one lean" to get rid of a fox who regularly steals food from their farms. Outwitted by Mr. Fox, "these horrible crooks, so different in looks" are thwarted at every turn as their ploys backfire. As the conflict escalates, Mr. Fox devises a plan which will ensure full stomachs for not only his family but all his friends. In the play's resolution, Mr. Fox and friends celebrate with a sumptuous feast, putting an end to the feud with Boggis, Bunce, and Bean.

Roald Dahl lived with his family in Great Missenden, a village in Buckinghamshire, UK. The Dahl house was surrounded by fields and woods, but one particular tree-known locally as "the witch's tree"-inspired Dahl's writing of Fantastic Mr. Fox, which is said to be one of his own favorite stories. The "witch's tree" was a large, 150-year-old beech where Mr. Fox and his family lived, in a hole beneath the trunk. "Although it isn't called a witch's tree in the script, there is a tree on set that the foxes live under," Hagen reported.

According to the elder Edwards, this isn't Mara's first MAT performance. She also performed in Wind in the Willows, Charlotte's Web, and Jesus Christ Superstar, where she had a cameo part. When asked what mother and daughter enjoy about the theater experience, Michelene stated, "We absolutely love the range of emotions-from silly to sad-that we get to play while also being ourselves. We love the camaraderie, meeting new people, making new friends, researching the roles we play, and learning techniques for painting sets. We also love the artistry of theater and the reward it brings to our lives. After a show, people will typically approach us in awe of our ability to memorize lines. We also enjoy the satisfaction of a role well-played. Theater gives us something to share together."

After opening night on March 29, Edwards reported feeling relieved: "We didn't have a big audience but we were all on-spot with our lines and our cues, so we rode that high into our next performance," she said.

Edwards was especially satisfied about the success of opening night because the cast and crew had only been allowed two dress rehearsals and one week of stage time because of the run of Cabaret, the previous production at MAT with its elaborate set.

"The most challenging aspect of this show was the line memorization because we didn't have the benefit of blocking and knowing which line to speak cued by position on stage. Running lines cold versus running through a show on stage with blocking makes a huge difference for memorization," Edwards explained.

"The most satisfying thing about theater for me is totally getting into character," Edwards stated. "After one of our performances of Fantastic Mr. Fox, a person said my voice, sense of humor, and mannerisms reminded him of Vanessa McCarthy, so that was a huge compliment." Vanessa McCarthy is an American screenwriter and producer who is perhaps best known as a head writer and executive producer for the television sitcom Rules of Engagement,

One of the fifth grade teachers at Meadowlark Elementary, Mrs. Lesa MacLeod plans to prepare her class for the performance by discussing the book, characters, and setting, using Roald Dahl's official website as a resource.

"Although this field trip is optional, since it is an evening event and outside of school hours, I'm so glad the students will have the opportunity to see a live theater performance," Mrs. MacLeod said. "For many of the students, it will be their first time watching a theater production. It is always good to expose them to the arts and to introduce them to new experiences," she added.

In the Montana Actors' Theater production of Fantastic Mr. Fox, Michelene Edwards portrays a gluttonous farmer named Boggis, one of the three adult cast members in the show.

Showtime is at 8 p.m. on Friday and Saturday, with 2 p.m. matinées on both Saturday and Sunday, April 6 and 7. Tickets are available for purchase online or at the theater on Cowan Drive in Havre.