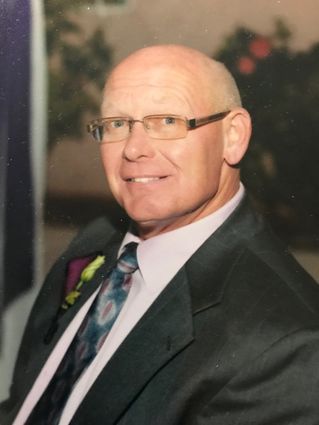 Michael (Mike) William Hellman was born January 25, 1954 in Havre, Montana to Wilfred (Willie) and Cora Hellman. Mike grew up and attended school and graduated from Chinook High School in 1972. He went on to earn his Bachelor of Science Degree from the College of Great Falls, now known as University of Providence, in Great Falls, Montana in 1976.

While growing up, Mike was on the Chinook Lions swimming and diving team, Boy Scouts, was an altar boy at St. Gabriel's Catholic Church and later was part of the music ministry playing the guitar, clarinet and singing. He played clarinet in the High School band. Mike enjoyed bowling, golf and was a member of the Chinook Jaycees, President of the Eagles Club and was involved with the State Eagles organization. He coached boys basketball for Zurich School,

Mike married Karen Pupich on July 27, 1974. They both taught school in Lima, Montana from 1976-1978 where Mike helped coach football and basketball. In 1978, they moved back to Chinook to go to work for his dad in the NAPA Auto Parts store and to help run the school buses. During this time Mike also owned the PS Charter Bus Service. He worked with the family until 1996 when the store closed and then went to work for Pyette Construction prior to moving to Carson City, Nevada.

Due to health issues, Mike moved to Las Vegas to be closer to his daughter, Rebecca, and to his Doctors as he was dealing with heart and lung issues.

Wishing to be back in Montana, in July 2018, Mike moved to the Eagles Manor in Helena, Montana where he lived until his death.

Mike was preceded in death by his father Willie, mother Cora and brother Greg.