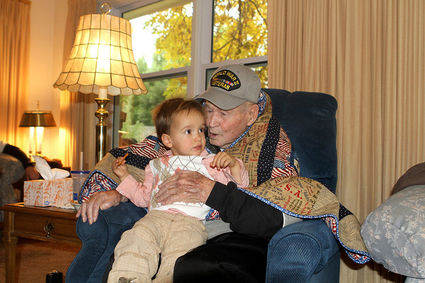 Daniel Trudo, 2, sits with his great-grandfather and World War II Veteran John Shockley, 94. Shockley was recently presented a quilt at his Cody home.

John Shockley, 94, never questioned his own motives for entering World War II. It was just what you did at the time.

"Everyone was getting involved in the war," Shockley said.

Though he grew up in landlocked Chinook, Mont., he didn't think much about taking to the high seas for service.

"All the young people were joining the Navy," Shockley said with a twinkle in his eye.

Shockley took off from Oakland Bay in California and was put on the USS General M.M. Patrick...