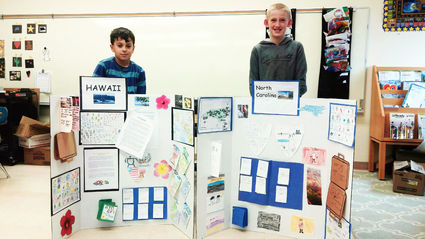 On May 22, the fourth graders at Meadowlark Elementary put their learning on display in a State Projects Fair. Each fourth grade student researched a state, and Wednesday's fair provided an opportunity for them to share their learning with parents and other community members, who walked around to look at the displays, and visit with the students about their states from 2:00-3:00 p.m. at the school's gymnasium.

According to fourth grade teacher, Ms. Shandel Fouts, the fourth grade social studies curriculum involves the study of different regions, and that unit culminates with a state fair to celebrate this learning. "This is our fifth year of doing this project," Fouts said. "Because every student seems to want the popular states like California, Texas, Hawaii, and New York, we have the students draw for a state to eliminate fighting over who gets which state," she added. "And sadly, I don't let any of the students do Montana since that's the state that I use as a model for the project."

Ryder Hofeldt was the lucky student to draw Hawaii, and he reported that the volcanoes and the Pearl Harbor Memorial were the most fascinating facts he discovered about the state. The Memorial is built over the remains of the sunken battleship USS Arizona, the final resting place for many of the 1,177 crewmen killed on December 7, 1941 when their ship was bombed by Japanese Naval Forces.

Besides visiting Honolulu to see Pearl Harbor, Hofeldt wants to travel to Oahu to visit the Disney Park since he has been to Disneyland in California and had fun there. About the state's project, Hofeldt expressed satisfaction in the feeling of being finished, saying, "It takes forever, but getting done is happiness."

The project is organized into five weeks of study, with students spending the first week engaged in the pursuit of information. "They receive a packet to guide them through this process and to give them an idea of what to look for. They gather books from the library, consult encyclopedias, and use their Chromebooks to explore on the internet," Fouts explained.

During week two, students create an accordion style book. In this book, students include all of their state symbols, six self-authored riddles using the 5 W's & H heuristic, and a map drawing of their state. The Five Ws and one H is a device for remembering the questions whose answers are considered basic in information-gathering. They are often mentioned in journalism (who, what, when, where, why, how), research, and police investigations. They constitute a formula for getting the complete story on a subject.

In the third week of the unit, students have to make a travel brochure for their state. This brochure will feature a famous person from the state, a famous city, landform, and any other interesting facts about the state. They also create a coat of arms focused around their state's history. Finally, they plan a vacation to their state and then pack a suitcase for their trip.

Week four is spent constructing an economy quilt with paper. This economy quilt will feature at least seven of the state's major industries and economic indicators. Students additionally design six postcards for their state and devise an ABC chart representing their state-with each letter of the alphabet calling to mind something for which the state is known.

Finally, in week five, students spend time affixing all of this information onto a tri-fold display board so that it can be displayed at the State Projects Fair. Students were busily putting the final touches on their displays on Thursday, May 16. As Xavier Ymzon was coloring his ABC Chart, he explained that he had selected an Amish horse drawn wagon for A since Ohio is Amish Country and a buckeye tree for B because the state's nickname is the Buckeye State. 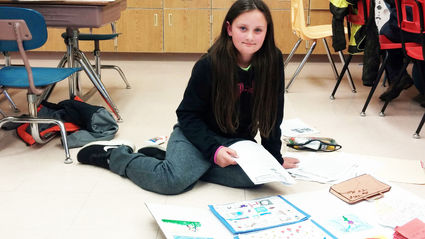 Gus Buck said he'd like to go to Oregon, the state he researched, because "there's a cool zoo there." He stated that his grandma, sister and cousin have been to Oregon, but he didn't get to go because he was at a Monster Truck Rally in North Dakota at the time.

The class invites the community to join them in celebrating their learning. Fair visitors are likely to discover that Oklahoma's state bird is the scissor-tailed flycatcher, that singer-songwriter Darius Rucker was born on May 13, 1966, in Charleston, South Carolina, or that Minneapolis, Minnesota, has a Sculpture Garden showcasing more than forty works from the Walker Art Center's collections, including the iconic Spoonbridge and Cherry.