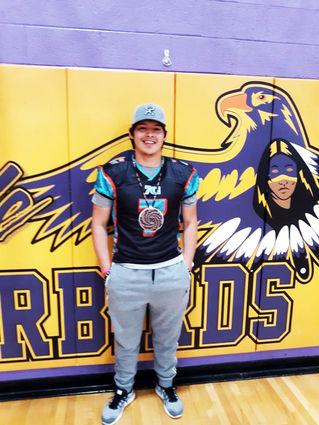 June was a busy month for the football program at Hays/Lodge Pole High School. New Assistant Football Coach Jerry Racine has been busy putting on camps and taking are youth to camps outside the area since coming to Blaine County.

Coach Racine was most recently the Head Coach in Browning. While there he helped the Indians end a 34 game losing streak, going 4-1 in the tough Northwest Class A division and hosting a first round playoff game.

Now Coach Racine is busy organizing camps for not just the the Thunderbird players but athletes from all around the area.

Along with Head Coach Josh Werk, Head Girls Basketball Coach Corey Morgan and Head Boys Basketball Coach Derrick Shambo student athletes have had the opporuntiy to get in the weight room and get instruction in addition to playing in various tournaments around the state.

The week long camp includes a 'Pro Day' to showcase the talent of the top 50 Native American Athletes and give them exposure to collegiate coaches, improving their opportunity to be recruited.

Allen and Young played on the Black Team coached by Racine and came out on top with a 46-0 win over the White Team. 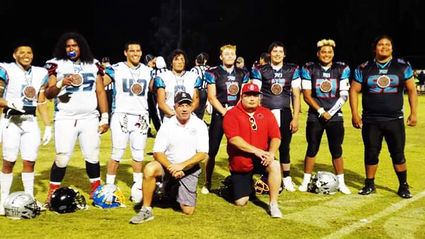 Allen will be a Punter at MSU-Northern this fall and showcased his talent with some great punts, including a muff that led to a scoop and score.

"My experience at the Indigenous Bowl was great. I got to learn many new things and meet new people. I made friends that I will remember for a long time, along with the coaching staff. The game had a lot of talented and competitive players that made it really fun. I want to give special thanks to the 7G foundation and Jerry Racine for allowing me to play football one last time," said Young.

"It was a good experience going to Soboba and playing in the 2019 Indigenous Bowl. I had a lot of fun, met new life long brothers and got to play with the top natives althetes in the nation. To be apart of the top native althetes in the nation, it was an honor to play. I couldn't do it with out my family having support from my Mom and Uncle Tyler giving me alot of advice on and off the feild. I went there played and now I want these younger kids to see what we went and did so they can follow us, it's just amazing what football can do, it teaches you life lessons," said Allen.

The game is put on by the 7G foundation. A foundation that focus on building relationships and giving opportunities for Native Kids.