Struggles continue on the gridiron for Chinook, Harlem and Hays/Lodge Pole 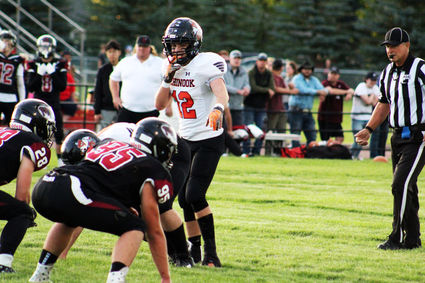 It was another difficult week on the gridiron for all three Blaine County football programs as they went winless for the second straight weekend. So far this season only the Hays/Lodge Pole Thunderbirds have found the win column (Rocky Boy).

The Sugarbeeters have been competitive each week but costly mistakes at crucial times of the game have kept them from gaining the advantage on their opponents.

This past weekend the 'Beeters were in Simms looking for their first win of the season against a solid Tiger team. The 'Beeters were unable to generate any momentum early on and the defense gave up some big plays helping the Tigers jump out to a 22-0 lead.

Sophomore Toby Niederegger found the endzone for the Sugarbeeters in the third quarter and following a successful two-point conversion the 'Beeters were withing two scores 22-8. 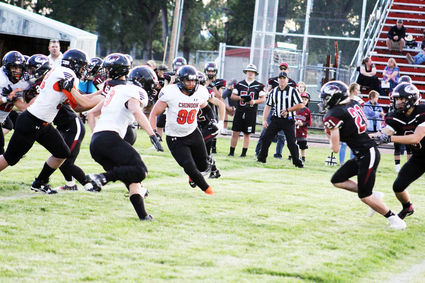 Junior Ethan MacLeod (90) and senior Kurtis Hamilton (5) stop the Simms runningback in the backfield during first quarter action in Simms.

The tigers would add another score to keep the game out of reach in securing a 30-8 over Chinook, dropping the 'Beeters to 0-3 on the season. The Sugarbeeters will welcome the Fort Benton Longhorns to town Friday with kickoff set for 7:00 p.m.

Niederegger scored his seventh touchdown of the season in the loss and has accounted for all but one of the 'Beeter scores on the season.

The Harlem Wildcats fell on the road to Northern B foe, Wolf Point 42-0. It was the Wildcats second loss to start the season after suffering a 34-0 setback in week one versus Poplar.

The Wildcats have shown flashes of positive things to come and will look to turn the corner this Friday when they welcome Roundup to town for their Homecoming contest.

The Hays/Lodge Pole Thunderbirds started the season with a nice win on the road against Rocky Boy but have faced tough times the past two weeks. Saturday the Thunderbirds played host to the No. 2 Shelby Coyotes and were defeated 88-0. The Thunderbirds will be at home again this weekend, hosting the Simms Tigers.