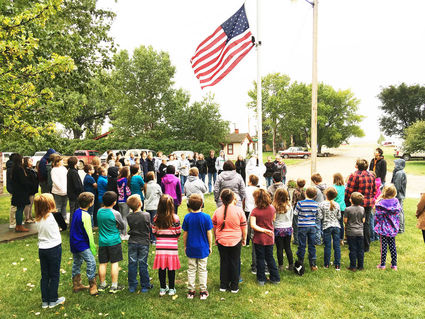 Although many of the students of Turner School were too young or not born yet, to remember the tragic events of September 11, the entire school met at the flag pole to pay their respects to those fallen victim to terrorists. The attacks killed 2,977 people and injured over 6,000 others, and caused at least $10 billion in infrastructure and property damage. The Student council of Turner School and advisor, Mrs. Elissa Zellmer organized this annual gathering where students could remember and think about how lucky we are to live in the United States of America. Despite this attack, Americans remain strong. God Bless the U.S.A.Above: Students gather to say the pledge at a half mast flag while the Student Council members led the group in a short program. They read a couple poems, had a moment of silence, and said the pledge.

Elementary students at Turner School enjoyed nice Fall weather last week at recess finding and collecting ladybugs. It was quite surprising how many of the beneficial bugs they found in just a short time. They had four or five buckets and each bucket was comparably full. I looked to see if there was any weather significance of what this meant, but nothing to surprisingly. Some wives tale research says it's a sign of good luck while other information found said it may mean a weather change. It turns out that the Big Flat was hit pretty hard with a snow storm the 28th of September, so in the ladybug scheme of things, it may have been an accurate forecast. Left: These little bug hunters, L-R, Isley Welsh, Madalyn Billmayer, and Izzy Van Voast hunt for ladybugs on the playground. 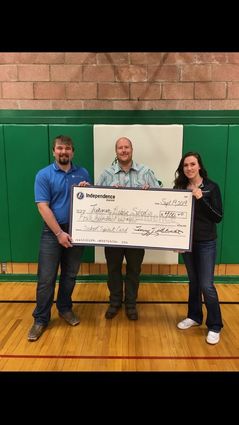 Independence Bank employees came to the Turner School recently where a presentation of $400.00 was made to the school. Turner is a participant in the Independence Bank School Spirit Debit card program. The spirit card allows people to represent their favorite school and help raise money for them each time they use the card. For each transaction made with the debit card, the bank donates 5 cents to the school represented on that particular Spirit card. Schools from all across the Hi-Line participate in this program. Turner Alumni, Lucas Reed, and his fellow Independence Bank employee, Kelsey Ceynar, presented the check to Turner Superintendent, Mr. Tony Warren.