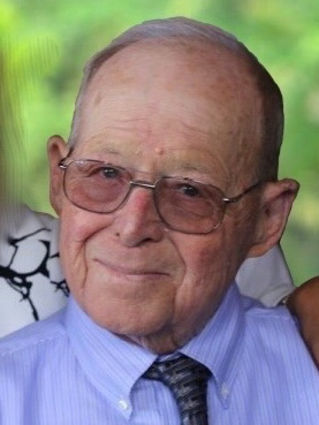 Keith L. Benson (age 89) passed away in Helena on November 8, 2019. He was born to Ed and Cora Benson near Hogeland on September 1, 1930 - the youngest of ten children. When Keith was seven, his family moved to Harlem where he grew up and graduated from Harlem High School in 1949. He attended Northern Montana college for a time. After serving in the Air Force during the Korean War, he returned to Harlem where he married Genevieve Schmitt. The couple raised three children and developed many lasting friendships during their 62 years together in Harlem. They moved to Helena in November 2018 because of health reasons, and to be closer to family.

Keith worked for the highway department for 30 years, and also played an important role in the community. He was involved with several organizations, including the Jaycees, the Lutheran Church, the Harlem Swim Team, the city council, the Harlem Senior Center, and the Governor's Advisory Council on Aging. Keith and Gen were faithful supporters of the Harlem Wildcats, especially during the 1970's and early 80s when their kids were in high school. After retiring from the highway department in 1989, Keith served as a Blaine County Commissioner for several years, before retiring for good. Over the next several years Keith and Gen enjoyed travelling, attending Carroll College football games, and spending time with friends and family.

Keith and Gen lived in the same house in Harlem from 1957 until they moved to Helena in November 2018. They have three children. Rod and his wife Mardi live in Helena, Randy and his wife Tia live in Billings, and Rhonda Hinrichs and her husband Craig live in Montana City. Keith and Gen also have 8 grandchildren. Keith was preceded in death by his parents, seven older brothers, and two older sisters (Dick, Bob, Ray, Dorothy, Bud, Russell, Harris, Harold, and Lois).

Besides his family, Keith loved dogs and little children. His friends knew him as a very friendly, dependable, hard-working, gentle person with a great smile.