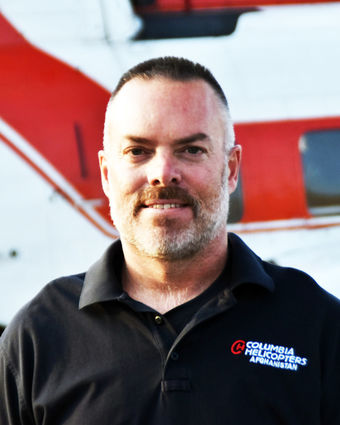 Helicopter Association International (HAI) is pleased to announce that Corey Brekke, maintenance manager in Afghanistan for Columbia Helicopters, is the 2020 recipient of the association's Excellence in Helicopter Maintenance Award. The award, sponsored by Rolls-Royce, recognizes an individual for long-standing excellence in the performance of helicopter maintenance, maintenance instruction or supervision, or a single significant and distinct contribution to helicopter maintenance. The award will be presented Jan. 29 at HAI's Salute to Excellence Awards luncheon at HAI Heli-Expo 2020 in Anaheim, California.

Brekke began his aviation career in Montana, where he obtained his A&P license in the winter of 1991. Subsequently, he worked for eight years in the South Pacific on a 350-foot tuna boat, where he was the only aircraft mechanic onboard, maintaining a Hughes 500.

In the spring of 2000, Brekke accepted a job with Columbia Helicopters. After only five days on the job, he departed to work in Alaska as the fourth man on a logging crew working on a Columbia Model 107-II Vertol.

Recognized early on for his can-do attitude, work ethic, ability to get along with and lead a crew, reliability, technical knowledge, and overall skill set, Brekke advanced to the position of assistant crew chief in just a year and then to crew chief in 2003. Brekke also forecasts maintenance and logistical needs to support the aircraft during high-utilization periods. His ability to troubleshoot problems and innate desire to get to the root of a technical issue is well known to those who work with him.

In 2011, Columbia received a contract to support Operation Enduring Freedom in Afghanistan, delivering four Vertol 107-IIs and a 234 Chinook. Brekke had started working as senior crew chief on the contract when it soon became clear Columbia needed someone in-country who had the knowledge, skills, and experience to lead a team that would meet the stringent operational readiness rate the military required. Brekke's extensive operational and maintenance experience made him the obvious choice for the position, and he was promoted to Afghanistan maintenance supervisor.

In the eight years since, Columbia's fleet in Afghanistan has grown rapidly, due in part because of Brekke's leadership and direction. The company now runs 12 aircraft in the country, nearly as far as geographically possible from the company's headquarters and maintenance facility in Aurora, Oregon.

Columbia promoted Brekke to Afghanistan maintenance manager in 2018. The new role required him to focus heavily on managing maintenance resources to support the military's missions. Instead of using traditional small maintenance teams assigned to specific aircraft, Brekke transitioned the teams to shift work resembling that of an airline, a change that required some team members to work 4 a.m. to 4 p.m. shifts in support of daily flight operations. The remaining mechanics work the night shift, performing aircraft inspections, repairs, component changes, and fleet-health improvements, among other tasks. These actions enable all 12 Columbia aircraft to be fully mission capable each day, able to meet the customer's mission requests.

Today, Brekke continues to lead from the front in all aspects of his job, whether working with his maintenance team on Columbia's Vertol 107-IIs or 234 Chinooks or coordinating with the head office in Aurora to ensure he and his crew have the parts needed to maintain the 90 percent-plus operational readiness rate they've exhibited since arriving in Afghanistan. Indeed, Brekke is always looking for new ways to improve and serve. Because of his dedication and leadership, Columbia has been able to maintain its impressive operational readiness rate while providing reliable service to U.S. and NATO troops after more than 118,000 flight hours.

Brekke's award will be presented at the Salute to Excellence Awards luncheon during HAI Heli-Expo 2020. HAI Heli-Expo, the world's largest helicopter trade show and exhibition, will be held at the Anaheim Convention Center in Anaheim, California, Jan. 27 to 30, with the exhibit hall open Jan. 28 to 30.