No. 2 Harlem continues its march through the schedule, 10-0 at the midway point 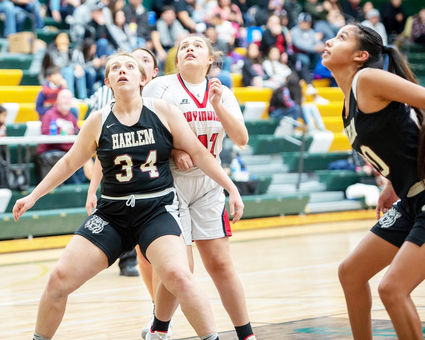 The Harlem Lady Cats are undefeated on the season at 10-0 and are ranked No. 2 in the latest Class B Power Poll. They certainly have had some stellar individual performances on the season, but one thing they do best is play as a team. That team includes several individuals playing big rolls to make the 'team' work. Above: Senior Aria Owens is an integral part of the Lady cat attack, doing whatever is asked of her on both sides of the ball.

The Harlem Lady Cats continued their winning ways this past weekend as they improved to 10-0 as we cross the midway point of the regular season. In the latest Class B Girls Power Poll the Lady Cats moved to No.2 in the rankings, improving one spot from the previous week.

Harlem was in Box Elder Friday night where they earned a 57-38 non-conference win over the Bears. Saturday afternoon the girls were in Poplar where they coasted to a 74-24 District 2B win over the Indians to remain perfect on the season.

Friday night the Turner Tornadoes were in Big Sandy and left with a comfortable 68-30 w...