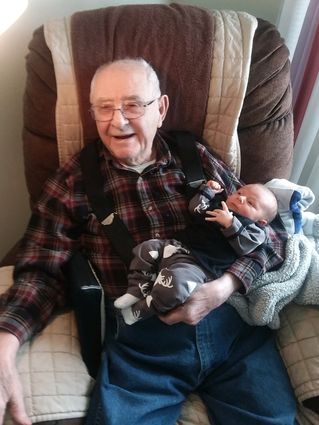 Theodore Daniel Lenhardt, 96, passed away at Northern Montana Hospital in Havre MT on February 25, 2020. A funeral service was held on March 4, 2020 at 11:00am at the American Lutheran Church in Chinook MT. Funeral arrangements are entrusted to Wilderness Funeral Homes of Chinook.

Ted was born on May 24, 1923 in Billings, MT to Conrad and Marie Lenhardt. Ted grew up in Billings and attended the Elder Grove School west of Billings. Ted met the love of his life Gerry and they were married on December 6, 1941 they were married for 78 years. Ted was drafted in 1945 and served a short time because he was discharged due to the death of his father and needed back at the family farm. Ted and Gerry moved to Havre in 1946 and farmed for Jumbo and Evelyn Ober. In 1951 they moved to Zurich and farmed for Henry A. Kuhr where he raised sugar beets until 1976. In 1988 he retired and they moved to Havre and lived there until 2009 when they moved to Chinook.

Ted was an active member of American Lutheran Church in Chinook for many years. He was proud of the product he produced and he won many top sugar beet grower awards and was honored at the Sugar Beet banquets in Billings. Ted loved to read, play pinochle and his farming, but his favorite thing was to dance with his lovely wife and his two favorites where the waltz and especially the polka.

Dads love for his family and kind heart were always an inspiration, his wife, children and grandchildren always came first.

He is preceded in death by his parents, sons Gary and Roger Lenhardt, brothers Wilbur, Don, Eugene and John. Sisters Hannah, Martha and Marlene.

In Lieu of flowers please make donations to American Lutheran Church and PAWS of Chinook.