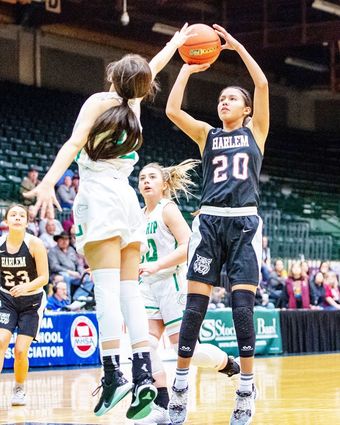 Harlem senior L'Tia Lawrence capped a stellar career with a 29 point effort in the teams final contest of the season, a 68-47 win over the Colstrip Fillies. Lawrence and her teammates had their season cut short at the Class B State Girls Basketball Tournament in Butte after the confirmation of Montana's first positive COVID-19 test later in the day.

The Harlem Lady Cats didn't get the finish they had hoped for at the Class B State Girls Basketball Tournament in Butte this past weekend, but they did make history along the way.

The tournament was canceled following completion of the semifinal contest Friday night cutting the season short and not allowing the Lady Cats the opportunity to play in the consolation final and potentially bring home some hardware from the tournament. The COVID-19 pandemic and Montana getting conformation of the first cases in the state led to Montana High School Association Executive Director Mark Beckham, to c...