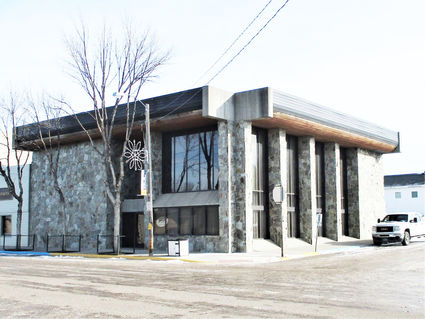 This bank building at Indiana and Fourth Streets in downtown Chinook was built in 1973. Wells Fargo acquired the bank in 1998 and closed the branch in mid-May of 2017. Chinook dentist Dr. Robert Chaffin purchased the building and plans to move the Chinook Dental Clinic to the new site "within the year."

On a visit to Chinook a few weeks ago I ran in to Dr. Robert Chaffin who owns and operates the Chinook Dental Clinic. I'd heard Dr. Chaffin had bought the former Wells Fargo building and there were several unofficial versions floating around about his plans for the building. He shared his plans to move his dental practice to the corner of Indiana and Fourth Streets in downtown Chinook. Interestingly a dental clinic first occupied the same corner nearly a century ago. Here's some details of the history and move.

The 'Dickson Block' eventually became the site of a bank