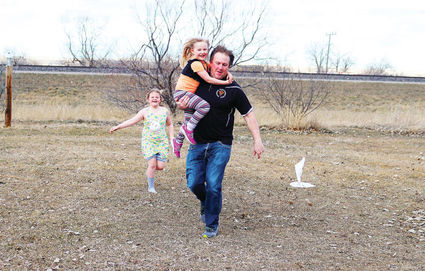 Fathers Day is celebrated on the third Sunday in June each year. All across the country Dad's are celebrated, often with barbecues or family gatherings of some sort. Kendall Harwood and his two oldest daughters Pepper and Sylvie, not pictured is his youngest daughter Beatrice.

Fathers Day is a widely celebrated day in June meant to honor Dads with a day to do as they please with their kids highlighting the days activities. Blaine County is a tightly knit, family oriented community that is always sure to deliver a great outing on these special days.

Summer is right around the corner and summer break for students is in full swing. Often times Dad will be treated to fishing getaways or maybe a weekend of camping at a favorite getaway destination.

Barbecuing is a staple at many celebrations and a few adult beverages and plenty of laughs are commonplace at gatherings. We all understand the day is about Dad, just as Mothers Day in May is about Mom.

While we all enjoy outings on both these special days, the general understanding as to the origins of the day is a lot less known. Mothers Day is widely celebrated and generally much more understood, but the history of Fathers Day has a very interesting beginning. Starting with the fact that it was actually inspired by Mothers Day.

Dads are genuinely celebrated for being role models, inspirations of strength and guidance or as the parent children look to for some quiet cash without Mom knowing.

My Dad, Mike Farmer has always been my hero. From my earliest recollection he has always been the person I looked up to the most. He has instilled in me a strong work ethic and a desire to approach life with confidence and vigor.

My Dad has always been there for all of his children and grandchildren as well. He has traveled hundreds of thousands of miles around the state to watch the Sugarbeeters and Blue Ponies and ventured to Arizona, Utah, Idaho, Oregon and Washington to watch high school All-Star basketball and MSU Northern Skylight basketball. He has traveled 1,000's of miles by himself in the dead of winter to attend these events no matter the weather conditions. If we are in need of help or in the hospital he is always right there. He never misses anything his kids or grandkids do. This dedication to family is contagious and mesmerizing simultaneously.

All Dads should be revered, and most are by their children. Blaine County is full of them and that is evident at functions across the county, 4-H, FFA, school, rodeo, camping and fishing to name a few.

We have a strong history of family, friendship and community but how many of us know the history of this day, again I ask?

The nation's first Father's Day was celebrated first on June 19, 1910, in the state of Washington. 58 years after President Woodrow Wilson made Mother's Day official,

Fathers Day became a nationwide holiday in the United States in 1972.

Mother's Day originated with peace-and-reconciliation campaigns of post-Civil War times. During the 1860s, at the persistent request of activist Ann Reeves Jarvis, one divided West Virginia town celebrated "Mother's Work Days" that brought together the mothers of Confederate and Union soldiers.

Mother's Day become a holiday in 1908, when Jarvis's daughter, Anna Jarvis, wanted to honor her own mother by making Mother's Day a national holiday.

The John Wanamaker department store in Philadelphia lent a hand sponsoring a service dedicated to mothers in its auditorium.

In part due to this association with retailers, who saw great potential for profit in the holiday, Mother's Day caught on right away and in 1909, 45 states observed the day. By 1914, President Woodrow Wilson approved a resolution that made the second Sunday in May a holiday to honor "that tender, gentle army, the mothers of America."

The mission to celebrate the nation's fathers did not meet with the same enthusiasm. Most believe this is because, as one florist explained, "fathers haven't the same sentimental appeal that mothers have."

A West Virginia church sponsored the nation's first event explicitly in honor of fathers, on July 5, 1908, with a Sunday sermon in memory of the 362 men who had died in the explosions at the Fairmont Coal Company mines in Monongah the previous December, but it was a one-time commemoration and not an annual holiday.

The next year, a Spokane, Washington, woman named Sonora Smart Dodd, one of six children raised by a widower, tried to establish an official equivalent to Mother's Day for male parents. She went to local churches, the YMCA, shopkeepers and government officials to drum up support for her idea, and she was successful: Washington State celebrated the nation's first statewide Father's Day on June 19, 1910. It wasn't celebrated nationally until 1972.

The idea of Fathers Day got off to a rocky start, derailed early on by Fathers themselves. Many men found great flaw with the day. Some historian wrote articles that "scoffed at the holiday's sentimental attempts to domesticate manliness with flowers and gift-giving, while others derided the proliferation of such holidays as a commercial gimmick to sell more products, often paid for by the father himself."

During the 1920's and 1930's, some groups looked to do away with Mother's Day and Father's Day altogether and replace it with a single holiday, Parents' Day. Subsequently each year on Mother's Day, pro-Parents' Day groups rallied in New York City's Central Park as a public reminder. Parents' Day activist and radio performer Robert Spere stated, "Both parents should be loved and respected together."

Ultimately the Great Depression derailed this effort to combine and de-commercialize the holidays. In turn retailers and advertisers hard hit by the depression doubled down their efforts to make Father's Day a "second Christmas" for men, promoting neckties, hats, socks, pipes and tobacco, golf clubs and other sporting goods, and greeting cards as an alternate to flowers and candy.

When World War II began, advertisers attempted to argue that celebrating Father's Day was a way to honor American troops and support the war effort. By the end of the war, Father's Day may not have been a federal holiday, but it was a national institution.

In 1972, in the middle of a hard-fought presidential re-election campaign, Richard Nixon signed a proclamation making Father's Day a federal holiday at last. Today, economists estimate that Americans spend more than $1 billion each year on Father's Day gifts.

Fathers Day is about Dad, but a multitude of summer activities keep dad and family at the forefront during the warmest months of the year. This summer has presented us with a new normal and some positives have become very evident says Corey Morgan of Hays, "I have seen a lot of people heading to Mission Canyon to camp, and many in the Hays and Lodge Pole areas are barbecuing a lot." Morgan added, "Nelson Reservoir, Sleeping Buffalo, Faber, Fresno and Second Lake at Beaver Creek have been popular destinations as well." 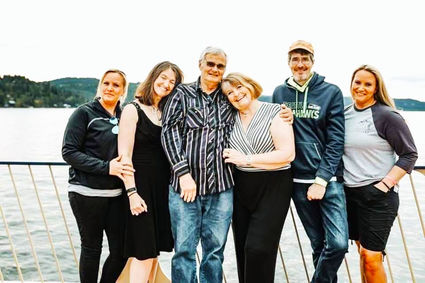 Fathers Day is celebrated on the third Sunday in June each year. All across the country Dad's are celebrated, often with barbecues or family gatherings of some sort. Pictured is Mike Farmer with his wife Michele and children Kody, Jodie, Julianne and Suzanne.

Morgan said most are traveling with just their family or immediate family but he has notice a lot more people being active, "More are taking advantage of the ability get outside and enjoy the outdoors, way more so than in the past. People have attended horseshoe tournaments, joined softball leagues in Havre playing in a Co-ed league on Wednesday nights. More are playing golf and are staying busy running and walking more than I've ever scene before. I like to see all this activity. Our community being involved in out doors, being active and gardening as well can only lead to better Mental and overall health."

Rilee Conlan resides on the Big Flat and has similar thoughts. "People work hard during the week and then often head out of town in groups to Fresno, Beaver Creek or Fort Peck to camp, swim and fish." She adds, "There are usually a couple of families or a group of kids together bringing the community together to these destinations.

Whatever way Dad is celebrated this coming weekend, he is sure to enjoy it. As a Dad myself, i know first hand that time together with friends and family is a treasured activity, and to be able to share these get-togethers with my kids is icing on the cake. Whatever may be planned for the weekend and Father's Day in particular, do it together and have fun!