South of the Border: A visit to the world's "largest building" 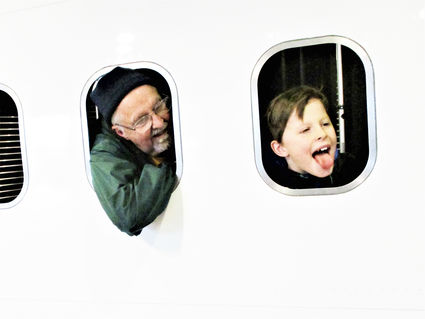 The columnist, and his 10-year old grandson, Riley, take a photo op on a jet ride at Boeing's Future of Flight center near the Everett factory in Washington state. Columnist Steve Edwards, his daughter, Sonya, and grandson Riley toured the Boeing plant nearby, billed as "the largest building in the world." About 300,000 visitors take the tour each year.

Columnist's note: During our recent annual post-Christmas visit to see our daughter and her family in the Seattle area, she treated us with a visit to one of the Seattle area's major attractions. My daughter, myself and a ten-year old grandson visited Boeing's airplane factory in Everett, Washington. The factory is near Paine Field, a facility used by the military during World War II and near the city of Mukilteo about 25 miles north of Seattle proper. The Everett factory holds the title of "world's largest building by volume."