Several Chinook High graduates have gone on to Law Enforcement 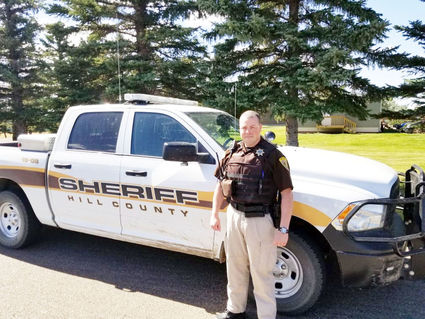 Hill County Sheriff Chief Deputy Corey Matkin, a 1994 graduate of Chinook High School retired this past Thursday after 21 years if service. Matkin said he will certainly miss his Law Enforcement family, but that it was time to move on.

Without question the vast majority of those men and women that take the selfless act to serve their communities, state and country by becoming involved in law enforcement have done so with outstanding service, valor and integrity the position requires. Very few individuals have the courage to do a vital job, that comes with high risk to one's self, with little gratitude and often requires dealing with folks who are not having the best of days.

Chinook High School is by no means big, even by rural Montana standards, but several of its alumni have taken the challenge to serve and protect, including three from the class of 2014 and three more from the class of 2010. Hill County Sheriff Chief Deputy Corey Matkin is a 1994 graduate and Chinook Chief of Police Elmer Zarn is a 1981 graduate. Additionally, a number of other graduates have served in some capacity, but the fact that seven alumni are serving the public currently is a strong representation for such a small community.

Thursday, September 4 was Matkin's last day on the job as Hill County Sherriff Chief Deputy after 21 years of service. Matkin graduated from Chinook in 1994 and after takin some time to decide what to do next, he drew upon what was motivating him that last year of school, "I started figuring out what I'd like to do the tail end of my senior year. I either wanted to join the military or go into law enforcement." Matkin started out as a Blaine County Sherriff Control Officer in July '95. In April of '96 he was hired on as a City of Harlem Police Officer, eventually becoming Chief of Police. Matkin then took the job as Hill County Sherriff Deputy in March of '99.

While working for the Hill County Sherriff's office Matkin spent 5 years with the Tri-Agency Drug Task Force before finishing as Administrative Chief Deputy. Matkin looks back on his time in law enforcement pridefully, "After serving over 20 years in law enforcement, I can say that the time goes by the blink of an eye. I can still remember my first days vividly. I remember the pride I felt and the feeling of belonging to an entirely new family.

Matkin has plenty of good advice to pass along to young deputies,

"On day one, you should start a journal. Write down some of these experiences that you have, and things that you see. Whether it is funny, ridiculous, frustrating, or a horror that will only fade with time, you should be able to look back at the end of your career and reflect on those moments. Just remember, you have a front row seat to the greatest circus on Earth." Understanding the current state of affairs, he offers this sage wisdom, "My other advice is to be safe and be careful. It's no secret that there is an anti-law enforcement sentiment that exists in our society. It's disheartening and has had a profound effect on today's veteran officers. You will be expected to make decisions in seconds that will be analyzed for months or possibly."

Lastly Matkin will miss his time in law enforcement, "To fellow and future law enforcement officers: Keep your family and friends close, and your head on a swivel. To the community: Please know that your support is needed and appreciated by law enforcement more now than ever."

While one retires another begins. 2014 CHS graduate recently was sworn in as City of Havre Police Deputy and is currently undergoing training at the Academy. Murnion is one of three from the class of 2014 to join law enforcement. Along with Tanner Gomke and Austin Chookomoolin, Murnion has taken the oath to serve and protect. "It's something that I was passionate about for a long time. I saw that Tanner and Austin both worked at the Hill County Detention Center right after high-school and eventually they took the additional steps to become law enforcement officers." Murnion eventually followed suit by starting his career in law enforcement at the Hill County Detention Center in March of 2018. His first day on the job with the Havre Police Department was August 4. Murnion credits his two classmates for helping him reach his decision, "They both told me many times that I should work at the detention center as it was a great steppingstone for them to become police officers." 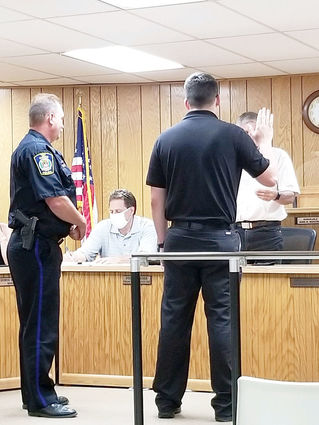 Brandon Murnion Swears in to become Police Officer with the Havre Police Department.

Murnion has been committed to the job and has received training along the way before heading to the Montana Law Enforcement Academy this fall. In September of 2019 he spent 30 days at the Academy where he completed the Corrections/Detention Officer basic class and received his CDOB basic certificate making him a certified detention officer. While at the detention center Murnion has received other certifications including Pepper Spray and Taser training as well as the Stop the Bleed First Aid Courses. Murnion is also CPR and AED certified.

Murnion is proud to serve, "My favorite part about the job currently as a police officer with the Havre police department is being able to help people that really need it. Sometimes they aren't able to help themselves and that's where we come in. I take the most pride in knowing that I am making a difference in my community, even by simply being out on the streets people can be at ease when they see us because they are in a safe environment."

See next weeks paper as we complete our look into Tanner Gomke, Justin Gomke, Donnie Kokkeler and Austin Chookomoolin's service