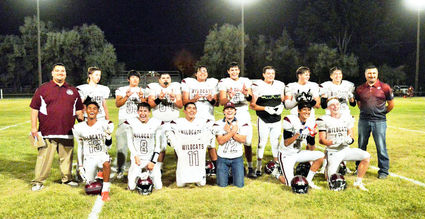 The Harlem Wildcats picked up a huge season opening win this past Friday, taking down the Poplar Indians 42-26. The Wildcats were a happy bunch following their first victory in a long time. Senior tailback Andrew Rasmussen rushed for a school record 308 yards on just 15 carries. Rasmussen also found the end zone five times to propel the Wildcats to a win. Harlem also honored it's five seniors as they and their families took the field prior to the game.

The Harlem Wildcats have had a long tough dry spell where wins on the grid iron have been measured in years, not weeks. The 2020 Wildcat Football team has put in the time and effort to make sure that doesn't continue. They did just that in their season and home opener this past Friday as they dominated the visiting Poplar Indians start to finish while earning a 42-26 win.

The Wildcats haven't found the win column since September of 2017 when they picked up a forfeit win over Poplar. Head Coach Derek Azure, along with coach Ken Mount have done a nice job preparing this group of student athle...