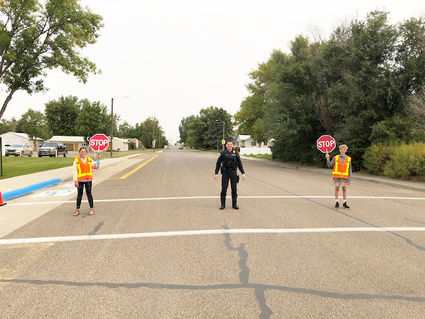 As he conducted training sessions, the main message that Officer Spudic wished to impart to the students was that in playing the crossing guard role, they are in fact executing the same protocols and performing the same job as that of a police officer: Controlling the flow of traffic.

"I stressed the need for them to raise that stop sign high, since they are of a smaller stature than an adult, and to be aggressive but not to rush into the street. We don't want drivers to be taken by surprise when a child darts into the street from behind a parked bus, for example," Officer Spudic explained.

Although the Chinook Police Department tries to have an officer on New York Street every day, the crossing guards provide extra safety for pedestrians at times when traffic has potential to get congested with people dropping off and picking up children before and after school.

During his delivery of the crossing guard curriculum, Officer Spudic was especially impressed with one question asked by a fifth grader: "Why is it that in the afternoon we have three crossing guards and in the morning, we only have two?"

"I considered it pretty impressive that a fifth grader noticed the difference in duty personnel and asked that important question. I explained that only two crossing guards are on duty in the mornings when there is a steady trickle of traffic but three are stationed in the afternoons when the flood gates open."

Officer Spudic wishes to remind motorists to use extra caution whenever they are travelling on New York Street during school hours.