Looking for answers, Part II: Who was Tom Cosnah? 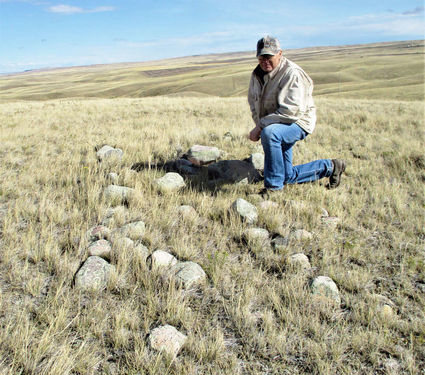 Mark Burkhartsmeyer poses above two initials, "K P," atop a small hill on his family's ranch south of Chinook. It's believed sheepherders used glacial erraticas (random rocks carried and dropped by glaciers) to do rock writings. Some sheepherder markers were likely used to indicate trails, boundaries or water sources, while others, like these initials, were likely built as a distraction from a lonely job.

This is a new appeal to alert readers for information about another local folk art mystery. Several weeks ago Mark Burkhartsmeyer asked me by phone, "Are you the paper's expert on local history?" I said I was interested in local history, was no expert but enjoyed unraveling local historical mysteries.

He shared information about some rock writing on the Burkhartsmeyer's ranch south of Chinook. He described rock writing as letters and words spelled out using random rocks found in the area. Of particular interest was the complete name, spelled out with rocks, of Tom Cosnah. Mark said, "I suspect he was a sheepherder when the Miller Brothers owned the land in this area and raised sheep. I would like to learn about Tom Cosnah-where he was from, when he was in this area, what his history was and where he ended up." I was hooked as soon as I heard the story.

The piles of rocks and stones sheepherders made had many names, depending on where in the West they were found. Where rimrock was plentiful, the rock could be piled into columns that could stand several feet tall. In our area the markers are mostly piles of rounded rocks.

The markers came to the New World with sheep and sheepherders from Spain. Built as manmade landmarks markers identified access to water, a common trail or boundaries among various flocks of sheep. Those were the practical reasons for the markers.

It's believed sometimes the herdsmen built markers as a pastime as a diversion from the solitary nature of their work. Like woodsmen carving their initials in a tree to indicate they had been at a particular place, the sheepherders piled rocks or used rock writing to make their mark. Sometimes markers were like public check-in points, with passing sheepherders adding their rocks to an existing pile. Though not common, sometimes they left their mark with initials made with rocks. Mark Burkhartsmeyer's discovery was of an unusual entire name written with rocks.

A hilltop with multiple rock writings

Mark Burkhartsmeyer took me down to the family ranch. We went through the area with the ranch buildings and entered a pasture, heading generally south and east. Even this late in the year the grass was high. We stopped at the foot of a small but steep hill and Mark said, "This is where we walk." On the short walk up we passed numerous glacial erratics, random rocks and stones of all sizes and generally all rounded.

On top of the hill, with the Bear Paws to the south and Snake Butte barely visible to the east, Mark began walking through a small field of various sized stones.

Continued on A3: Tom Cosnah

He explained he was on a four-wheeler checking for weeds when he saw a couple of regular sheepherders' markers, then realized there were letters spelled out with rocks. The strewn rocks, grass, patches of lichen on the rocks and dirt blown up around the rocks camouflaged the manmade writing. It was easy to understand how someone could pass the writings and never realize they were there.

Of most interest, and obviously the biggest project, was the spelled out name of 'Tom Cosnah.' The word 'Tom' was made with larger stones and laid in a straight line. The surname, 'Cosnah,' was laid at a slightly different angle from the first name and made with smaller rocks. It suggests the two names might have been laid out at different times. And all around the area were more two-letter initials and random single letters, like it was a spot where sheepherders left their mark either for a purpose or just for something to do.

Mark opined the writing was done on a hilltop for several reasons. "First," he explained, "the livestock tends not to like to climb and laying out the rock writings up here they would be less likely to get disturbed by animals moving around." Another part of the explanation was the panoramic view of the surrounding area, where a sheepherder might rest and keep an eye on his flock. Perhaps it was a stopping off place that sheepherders regularly visited.

Can you provide information about Tom Cosnah? 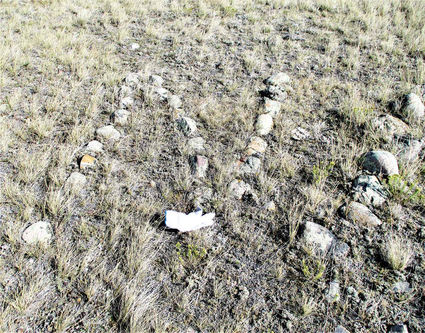 This photo shows part of the rock writing used to spell out both the first and last name of Tom Cosnah, believed to be a sheepherder on the Miller Ranch more than half a century ago. Sheepherders regularly built rock markers but actually writing words or initials was less common. This writing is on a ranch south of Chinook.

Interestingly, the stone writing of Tom Cosnah's name is distinguishable in a satellite photo on the Google Earth map of the area. Tom put in considerable effort to gather and lay out the rocks to spell out his name. Is it possible he did the same thing in other places around the area? Given the nature of the area with the random rocks and grass other similar sites could still be undiscovered.

Another interesting thing is the surname Cosnah. I'm no expert on the origin of surnames but my poking around on the internet turned up only one named person with the last name of Cosnah. I have no idea where the surname originated. Mark thinks the surname might be from eastern Europe.

So, to readers: Does anyone have any information about Tom Cosnah? We're looking to learn about where he came from, his family history and where he went from this area. It would also be helpful to know the history of the surname Cosnah. And, does anyone know of other examples of rock writing in our area they would be willing to share? You know the drill: leave a message for Steve Edwards at 357-3573 or email your contact to bcjads@mtintouch.net. I'll get back with you. And just so you know, I have one more mystery about a piece of local folk art that I'll be sharing soon. And thanks in advance for your help.